Liverpool take on Crystal Palace at Selhurst Park on Saturday lunchtime. Here is the team we expect Jurgen Klopp to select for the game:

Goalkeeper: Alisson Becker is certain to keep his place between the sticks for Liverpool with Caoimhin Kelleher likely to be selected on the bench ahead of Adrian.

Defence: Liverpool have been handed a major boost in defence as Joel Matip is back in contention after returning to full training having missed the 2-1 victory over Tottenham with a back complaint. The Cameroon international is expected to be recalled to start alongside Fabinho in the middle of the back four with Rhys Williams making way despite impressing on Wednesday night.

Trent Alexander-Arnold should keep his place at right-back while Andrew Robertson will continue on the left. Kostas Tsimikas is out with a knee injury while Virgil van Dijk and Joe Gomez remain on the sidelines with long-term injuries.

Midfield: Thiago Alcantara has resumed light individual training after recovering from a knee injury that’s hampered him for the last two months and the Spaniard could be available again before the end of the year.

However, the trip to Selhurst Park comes too soon so Thiago remains out along with James Milner – who’s still working his way back from a muscle injury – while Xherdan Shaqiri is also unavailable for Liverpool.

Naby Keita is back in contention after returning to full fitness so he could be handed a recall with Gini Wijnaldum given a well-earned rest. Curtis Jones should keep his place after another impressive performance against Spurs.

Liverpool captain Jordan Henderson is expected to keep his place in midfield while Alex Oxlade-Chamberlain will be hoping to make his first appearance of the season off the bench after being an unused sub in midweek.

Forward: Liverpool will continue to be without Diogo Jota as he’s facing weeks out with a knee injury. Takumi Minamino and Divock Origi are options for Klopp but I think we’ll see him stick with his preferred front three of Roberto Firmino, Mohamed Salah and Sadio Mane once again tomorrow afternoon. 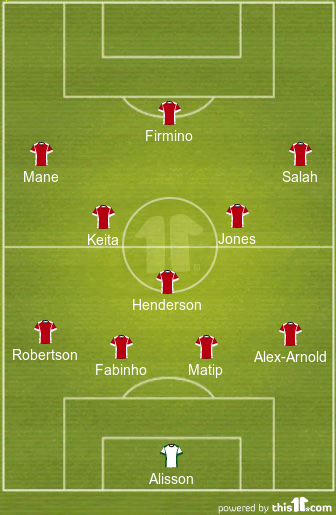