Chelsea take on Morecambe at Stamford Bridge in the third round of the FA Cup on Sunday afternoon. Here is the team we expect Frank Lampard to select for the game:

Goalkeeper: Edouard Mendy is expected to be rested so Kepa Arrizabalaga should get a rare start between the sticks tomorrow afternoon.

Defence: Chelsea are likely to make changes in defence, too, with Ben Chilwell given a breather so Emerson could start at left-back. Thiago Silva and Kurt Zouma should also be rested with Antonio Rudiger recalled in the middle of the back four. Andreas Christensen is ruled out so Fikayo Tomori could start alongside Rudiger.

Reece James is struggling with a thigh injury that kept him out of Chelsea’s defeat to Manchester City last time out so Cesar Azpilicueta could keep his place at right-back.

Midfield: N’Golo Kante is a doubt with a hamstring injury and Lampard is unlikely to risk the Frenchman so Jorginho should start in midfield tomorrow. Billy Gilmour is pushing for a recall and the 19-year-old could replace Mateo Kovacic in the middle of the park.

Mason Mount has played a lot of football this season so Lampard may take the opportunity to give him a well-earned rest. Kai Havertz could therefore be recalled to start for Chelsea against Morecambe.

Attack: Timo Werner is likely to be rested so there will be a change up front. Olivier Giroud is an option for the Chelsea boss but Tammy Abraham could be given the nod through the middle with the Frenchman having to settle for a place on the bench.

Christian Pulisic could be given a breather with Callum Hudson-Odoi recalled on the wing while Hakim Ziyech could keep his place on the opposite flank this weekend. 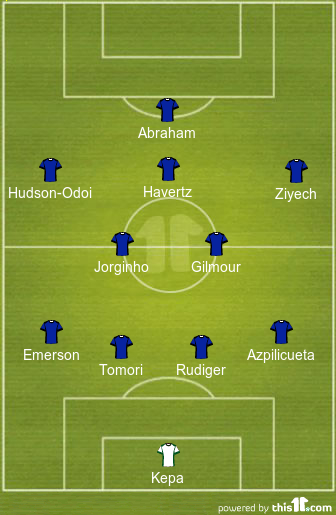