Manchester United take on Liverpool at Anfield in a top of the table clash on Sunday afternoon. Here is the line-up we think Ole Gunnar Solskjaer will select for the game:

Goalkeeper: David De Gea should keep his place between the sticks tomorrow so Dean Henderson will have to settle for a place among the substitutes.

Defence: Man Utd will need to assess the fitness of Victor Lindelof as he’s missed the last couple of games with an on-going back injury so Eric Bailly should keep his place alongside Harry Maguire in the middle of the back four.

Aaron Wan-Bissaka will once again start at right-back while Luke Shaw appears favourite to keep his place at left-back ahead of Alex Telles so we could see the same United back four that started against Burnley on Tuesday night.

Midfield: Manchester United should freshen things up in midfield with Fred pushing for a recall. Nemanja Matic is a doubt with a tight groin so he may be the man to make way against Liverpool tomorrow.

Scott McTominay is also likely to be recalled in the middle of the park while Paul Pogba should keep his place after an excellent goal-scoring performance during the 1-0 win over Burnley last time out.

Bruno Fernandes is certain to keep his place in the advanced attacking midfield role so Donny van de Beek will have to settle for a place among the substitutes while Juan Mata is also expected to miss out on a starting spot at Anfield.

Attack: Anthony Martial is a doubt for the trip to Liverpool after being forced off with a thigh injury during Man Utd’s win at Burnley. Solskjaer hasn’t ruled the Frenchman out entirely but Martial is unlikely to be risked from the start against Liverpool.

Therefore, Edinson Cavani is expected to start in the Manchester United attack along with Marcus Rashford. That means Martial may have to settle for a place on the bench alongside the likes of Mason Greenwood and Daniel James. 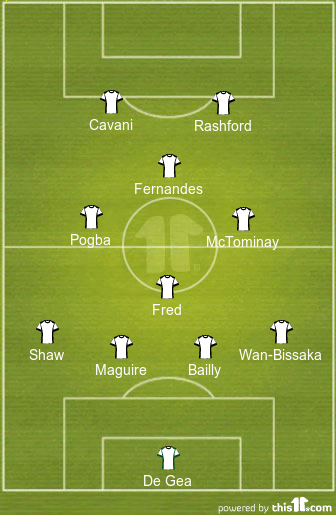