Arsenal take on Newcastle United at the Emirates Stadium on Monday evening. Here is the team Gooner Mac expects Mikel Arteta to select:

Goalkeeper: Arsenal’s number one goalkeeper Bernd Leno is certain to keep his place between the sticks tomorrow so Alex Runarsson will once again be named on the bench.

Defence: Gabriel was an unused substitute during the 0-0 draw with Crystal Palace last week after returning to training following his positive Covid result and the Brazilian will be hoping for a recall against Newcastle on Monday night. David Luiz could be the man to make way as Rob Holding should keep his place in the middle of the Arsenal back four.

Pablo Mari will miss the visit of Newcastle due to a calf issue but Kieran Tierney is back in training after sitting out the Palace game with a muscle problem. The Scottish international will be assessed to see if he’ll be able to return tomorrow night but Arteta is unlikely to take any risks.

Ainsley Maitland-Niles put-in a disappointing performance at left-back in Tierney’s absence on Thursday night so we could see Bukayo Saka drop into defence to give Arsenal more attacking threat down that flank. Hector Bellerin should keep his place at right-back.

Midfield: Thomas Partey made his return from a thigh injury with a second half cameo appearance against Crystal Palace so he’s pushing to start on Monday night. Dani Ceballos is the man most likely to make way as Granit Xhaka should keep his place in the middle of the park.

Arsenal lacked any creativity going forward last time out so Arteta will be hoping to see more from youngster Emile Smith Rowe in the No.10 role. Joe Willock is another option but I think Smith Rowe will keep his place.

Attack: Arsenal were toothless against Palace so they need to up their game in attack if they want to get all three points against Newcastle. If Saka drops to left-back, then Arteta will have a position to fill on the right and Nicolas Pepe is probably ahead of Willian in the pecking order.

Pierre-Emerick Aubameyang will keep his place and he’ll most likely start from the left with Alexandre Lacazette leading the line up front. Eddie Nketiah will therefore have to settle for a place among the substitutes. 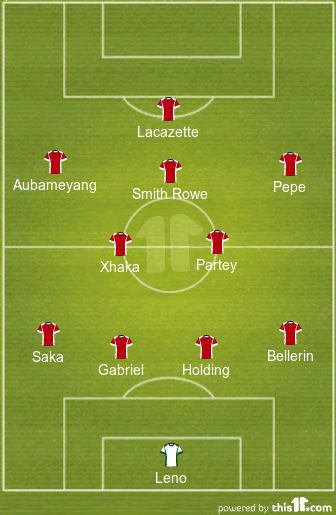