Chelsea take on Luton Town at Stamford Bridge in the fourth round of the FA Cup on Sunday afternoon. Here is the team we expect Frank Lampard to select for the game:

Goalkeeper: Number one goalkeeper Edouard Mendy is expected to be rested with Kepa Arrizabalaga recalled to start between the sticks.

Defence: Chelsea should make changes in defence as Kurt Zouma is pushing for a recall after being left out recently. Andreas Christensen could also come back into the side with Antonio Rudiger and Thiago Silva making way.

Ben Chilwell should be given a breather with Emerson recalled to start at left-back and Cesar Azpilicueta is expected to come in for Reece James at right-back against Luton tomorrow.

Midfield: N’Golo Kante is still a doubt with an ongoing thigh injury that’s hampered him in recent games but Jorginho is pushing for a recall so he’s likely to replace Mateo Kovacic in the middle of the park this weekend.

Mason Mount has been a rare shining light for Chelsea in recent weeks so Lampard may want to protect him. That could see Billy Gilmour coming in for the FA Cup fourth round clash.

Kai Havertz has endured a tough start to his career in west London but he may be given another chance to impress tomorrow with the German international lining-up alongside Jorginho and Gilmour in midfield.

Attack: Olivier Giroud has recovered from an ankle injury so he’s back in contention, however, he may find himself on the bench as Timo Werner is pushing for a recall after the 24-year-old was left out against Leicester City on Tuesday night.

Tammy Abraham could drop to the bench after struggling at the King Power Stadium in midweek. Hakim Ziyech is expected to be recalled to start for Chelsea against Luton with Christian Pulisic dropping out but Callum Hudson-Odoi may keep his place in attack. 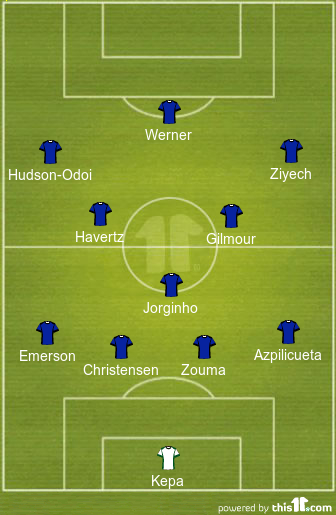