Chelsea take on Burnley at Stamford Bridge on Sunday afternoon. Here is the team we expect Thomas Tuchel to select for the game:

Goalkeeper: Number one goalkeeper Edouard Mendy is certain to keep his place between the sticks so Kepa Arrizabalaga will have to make-do with a place on the bench.

Defence: Tuchel went with a back three in his first game in charge so he’s expected to stick with that system tomorrow. Cesar Azpilucueta is likely to keep his place on the right side of the Chelsea defence with Thiago Silva once again marshalling the back line.

Antonio Rudiger did well during the 0-0 draw with Wolves last week so he could keep his place against Burnley meaning the likes of Kurt Zouma and Andreas Christensen miss out.

Midfield: Ben Chilwell should keep his place in the left wing-back role but we could see a change for Chelsea on the opposite flank with Reece James pushing for a recall after being an unused substitute against Wolves. Callum Hudson-Odoi performed well in the position in midweek but he could drop to the bench tomorrow.

N’Golo Kante could make his return from a thigh injury but it remains to be seen whether he’s considered fit enough to start so Jorginho should keep his place in the middle of the park against Burnley.

Mateo Kovacic will be hoping to retain his place after a solid performance against Wolves but Mason Mount is pushing for a recall and he was unlucky not to start in midweek so he could be given a chance by Tunchel.

Attack: Timo Werner wasn’t involved last time out but the German attacker could be recalled to lead the line up front for Chelsea tomorrow. That would see Olivier Giroud drop to the bench while Tammy Abraham would also miss out.

Christian Pulisic was a substitute against Wolves but he could be drafted in to the attack with Hakim Ziyech the man making way as Kai Havertz could be given another chance to impress. 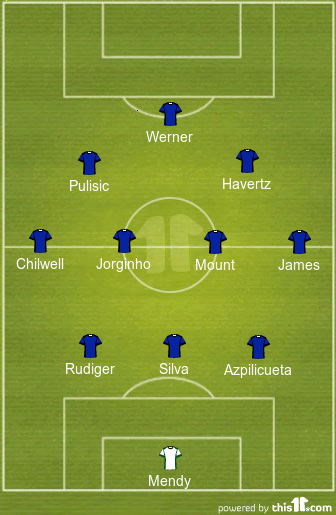