Arsenal take on Wolves at Molineux this evening. Here is the team Gooner Mac expects Mikel Arteta to select:

Goalkeeper: Bernd Leno has once again been one of Arsenal’s most consistent performers this season so the German is one of the first names on the team sheet. Mat Ryan is out with a hip injury so Alex Runarsson is likely to be on the bench.

Defence: Kieran Tierney has been ruled out with an on-going muscle injury so Cedric Soares should keep his place at left-back after impressing in the last few games. That means Hector Bellerin should once again retain his spot at right-back.

David Luiz was superb during Arsenal’s 0-0 draw with Manchester United at the weekend so he deserves to keep his place while Rob Holding has also been very solid recently so Gabriel will have to settle for a place on the bench tonight.

Midfield: Thomas Partey overcame a minor knock to start for Arsenal at the weekend so he should line-up in the middle of the park this evening and the Ghanaian international’s return to fitness is a huge boost for Arteta.

Dani Ceballos could be back in contention after recovering from a calf injury but he’ll probably have to settle for a place among the substitutes with Granit Xhaka once again starting against Wolves.

Martin Odegaard made his debut with a late cameo appearance off the bench on Saturday and he’ll be hoping to feature again at Molineux but Emile Smith Rose is expected to start in the attacking midfield position.

Attack: Pierre-Emerick Aubameyang returned to full training yesterday after being released from quarantine following a visit to see his sick mother. The Gabon hitman could be back in the squad today but he’s unlikely to start due to a lack of training over the past couple of weeks.

Nicolas Pepe could therefore keep his place on the left wing after putting in a couple of impressive performances recently while Alexandre Lacazette should continue to lead the line up front after being given the all-clear following a bang to the head against United.

Bukayo Saka is set to return to the Arsenal squad after missing the draw with Man Utd due to a minor hip issue. The youngster could replace Gabriel Martinelli on the wing while Willian is also expected to be named among the subs.

Joe Willock has joined Newcastle on loan while Ainsley Maitland-Niles sealed a loan move to West Brom last night so they won’t be involved. 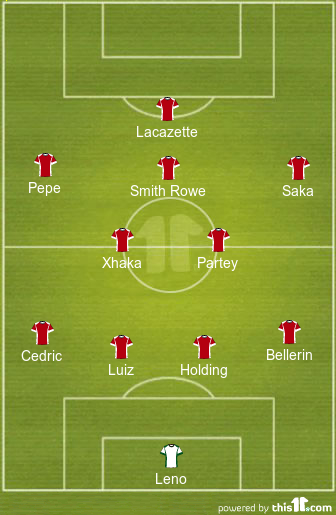