Chelsea take on Tottenham at the New Tottenham Stadium on Thursday night. Here is the team we expect Thomas Tuchel to select for the game:

Goalkeeper: Number one goalkeeper Edouard Mendy will once again start between the sticks for Chelsea so Kepa Arrizabalaga should be his support from the bench.

Defence: Tuchel appears to be settling on a back three with Thiago Silva at the heart of it so the Brazilian international should once again start against Tottenham. Antonio Rudiger has started both games under the new Blues boss so he’s expected to keep his place tomorrow night.

Cesar Azpilicueta has impressed on the right side of the back three so the Spaniard is likely to keep his place but Kurt Zouma is a doubt for the game so Andreas Christensen could be Chelsea’s defensive back-up on the bench.

Midfield: Ben Chilwell is pushing for a recall after being an unused substitute during the 2-0 win over Burnley at the weekend. Marcos Alonso marked his return with a lovely goal but Tuchel may want to freshen things up so Chilwell could be recalled against Tottenham.

Reece James has lost his starting spot since Tuchel arrived and he may have to settle for a substitutes role again tomorrow as Callum Hudson-Odoi has impressed in the right wing-back position in the last two matches.

N’Golo Kante is back in contention after recovering from a thigh injury and he could be recalled to start in the Chelsea midfield. Mateo Kovacic could be the man to make way with Jorginho keeping his place.

Attack: Kai Havertz is a doubt after picking up a knock so Mason Mount should keep his place in attack against Spurs. Hakim Ziyech is available again after missing the win over Burnley with a knock but he may be named among the subs.

Christian Pulisic is pushing for a recall against Tottenham and he’s expected to start on the left side of the front three. Timo Werner’s frustration’s in front of goal continue so it will be interesting to see if he keeps his place tomorrow night.

Tammy Abraham didn’t exactly take his chance at the weekend so I think we might see him drop out with Werner given another opportunity through the middle. That would mean Olivier Giroud would also have to settle for a place on the bench against old foes Tottenham. 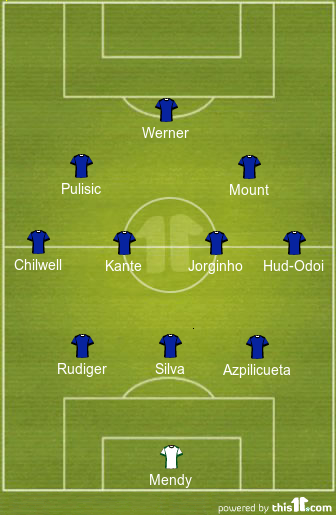