Chelsea take on Sheffield United at Bramall Lane on Sunday night. Here is the team we expect Thomas Tuchel to select for the game:

Goalkeeper: Chelsea’s number one goalkeeper Edouard Mendy will once again start between the sticks with Kepa Arrizabalaga acting as support from the bench.

Defence: Tuchel has settled on playing a back three since his arrival at Stamford Bridge but he’ll be without one of his key players tomorrow as Thiago Silva has been ruled out after picking up a muscle injury against Tottenham.

Kurt Zouma is also a doubt with a knock that’s kept him out of the last two games so Andreas Christensen is in-line for a recall to start alongside Antonio Rudiger while Cesar Azpilicueta should also keep his place on the right side of the back three.

Midfield: Ben Chilwell is pushing for a recall after being an unused substitute in the last two Chelsea games so Marcos Alonso could make way. Reece James played well against Spurs on Thursday night so he could keep his place on the right.

Jorginho was the match-winner last time out after converting a first half penalty and the Italian is expected to keep his spot in midfield but Tuchel may want to freshen things up with N’Golo Kante coming in for Mateo Kovacic.

Attack: Kai Havertz faces a late fitness test after missing the Spurs game with a muscle issue so a place on the bench might be the best he can hope for against Sheffield United tomorrow night.

Christian Pulisic is tipped for a recall in attack after being on the bench on Thursday and Callum Hudson-Odoi may be the man to drop out. The youngster has played very well since Tuchel arrived but he may get a rest having started the previous three games.

Mason Mount could keep his place ahead of Hakim Ziyech but we may see a change up front with Tammy Abraham recalled in place of the miss-firing Timo Werner. Olivier Giroud is expected to remain on the bench. 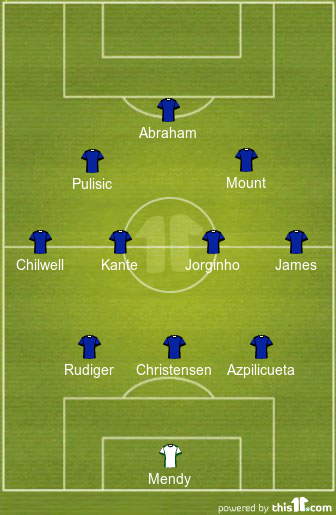