Chelsea take on Barnsley at Oakwell Stadium in the FA Cup on Thursday night. Here is the team we expect Thomas Tuchel to select for the game:

Goalkeeper: The Chelsea boss has confirmed he’ll make plenty of changes so we should see Kepa Arrizabalaga handed a recall in goal with Edouard Mendy given a rest.

Defence: Tuchel will no doubt go with a back three again but he’ll continue to be without the presence of Thiago Silva due to a muscle injury so Andreas Christensen should keep his place in the starting eleven.

Antonio Rudiger may also start once again but we could see Cesar Azpilicueta given a breather as Kurt Zouma is fit to return after recovering from a knock that’s hampered him in recent games.

Midfield: Ben Chilwell started during the 2-1 win at Sheffield United on Sunday so he could make way with Marcos Alonso recalled on the left side of the Chelsea team. Reece James has impressed in the last two matches but he might be rested with Callum Hudson-Odoi brought in to start in the right wing-back position.

Tuchel has confirmed N’Golo Kante will start against Barnsley so Jorginho is expected to be rested while Mateo Kovacic may also get the night off having played a lot of football since Tuchel’s arrival.

That could open the door for Billy Gilmour to make a rare appearance. Tuchel made it clear the 19-year-old would get opportunities after blocking a loan move in January so Gilmour will be keen to impress if he’s given the nod tomorrow night.

Attack: Kai Havertz remains a doubt with a knock that’s kept him out recently while Timo Werner is expected to be protected after picking up a dead leg against Sheffield United at the weekend.

Christian Pulisic could therefore be recalled to start for Chelsea tomorrow after missing the win at Bramall Lane due to personal reasons. Hakim Ziyech is also pushing for a recall after building up his fitness following a hamstring injury so he could replace Mason Mount in the front three.

Olivier Giroud started on Sunday but I think we’ll see the Frenchman dropping to the bench against Barnsley with Tammy Abraham handed a chance to impress up front. 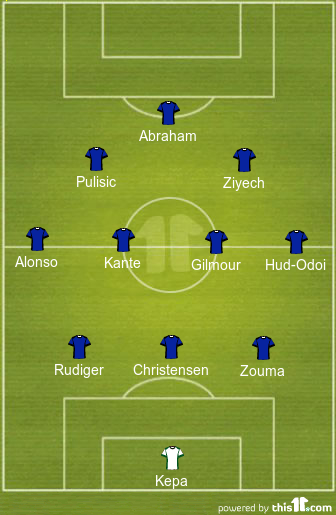