Arsenal take on Leeds United at the Emirates Stadium on Sunday afternoon. Here is the team Gooner Mac expects Mikel Arteta to select:

Goalkeeper: Bernd Leno is set to return after serving his one-match suspension during the defeat to Aston Villa last weekend. Mat Ryan made a solid debut at Villa Park but he’s expected to drop to the bench.

Defence: Kieran Tierney has been ruled out for the sixth consecutive game as he’s still nursing a knee injury so Cedric Soares is expected to continue at left-back while Hector Bellerin should keep his place on the right.

David Luiz is back in contention after serving his ban but we could see Gabriel keeping his place against Leeds. Pablo Mari is another option for Arsenal after he regained full fitness but Rob Holding deserves to keep his spot in defence.

Midfield: Arsenal have been handed a major blow as Thomas Partey has been ruled out after picking up a thigh injury against Villa and the Ghanaian international will be a huge miss in the middle of the park.

Dani Ceballos is the man expected to be recalled to start alongside Granit Xhaka this weekend with Mohamed Elneny named on the bench.

Martin Odegaard has made a couple of impressive cameo’s off the bench and he could be in-line to make his full debut for Arsenal on Sunday. Emile Smith Rowe has performed superbly-well in the attacking midfield role but he’s looked tired lately so could do with a rest.

Attack: Pierre-Emerick Aubameyang is pushing for a recall and we could see the Gabon hitman leading the line through the middle on Sunday with Alexandre Lacazette having to make do with a place on the bench.

Bukayo Saka should keep his place on the right wing as he’s been Arsenal’s best player in recent weeks. Nicolas Pepe has also been in terrific form recently so he could start once again on the left wing with Gabriel Martinelli and Willian named among the substitutes. 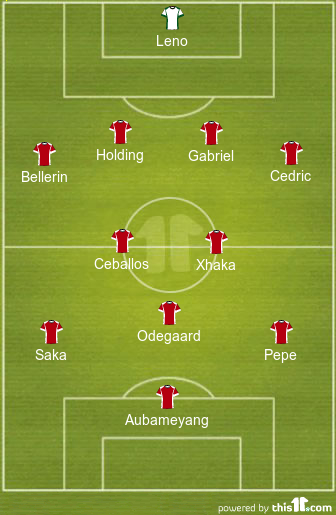