Arsenal take on Liverpool at the Emirates Stadium on Saturday night. Here is the team Gooner Mac expects Mikel Arteta to select:

Arsenal take on Liverpool at the Emirates Stadium on Saturday night. Here is the team Gooner Mac expects Mikel Arteta to select:

Goalkeeper: Arsenal conceded another three goals during the thrilling 3-3 draw with West Ham before the international break but Bernd Leno is certain to keep his place between the sticks tomorrow.

Defence: However, Arteta is expected to make a couple of changes to the Arsenal defence that started at the London Stadium two weeks ago. Hector Bellerin is set for a recall at right-back with Calum Chambers making way despite a positive showing against the Hammers.

Gabriel is also expected to come back into the back four alongside David Luiz with Pablo Mari dropping to the bench. Kieran Tierney will keep his place at left-back so Cedric Soares will miss out against Liverpool.

Midfield: Thomas Partey is fully fit so he should keep his place in the Arsenal midfield alongside Granit Xhaka. Dani Ceballos and Mohamed Elneny will be options from the bench against Liverpool if Arteta needs to mix things up in the second half.

Martin Odegaard has been in excellent form lately and recovered from a minor ankle injury to start for Norway earlier this week. Therefore, the on-loan Real Madrid star should keep his place in the attacking midfield role for the Gunners.

Attack: Bukayo Saka is a major doubt after being forced to withdraw from England duty due to a thigh injury. The 19-year-old was unable to take part in full training on Thursday so a place on the bench against Liverpool is probably the best he can hope for.

Emile Smith Rowe was also pulled out of the England U21 squad earlier this week after picking up a hip injury. The attacker will be assessed at London Colney today before a decision is made over his involvement tomorrow.

Nicolas Pepe could therefore start in attack for Arsenal with Pierre-Emerick Aubameyang keeping his place out wide after starting on the wing against West Ham last time out.

Alexandre Lacazette impressed against the Hammers after scoring a late equaliser so the Frenchman could keep his place up front with the likes of Gabriel Martinelli and Willian named among the substitutes. 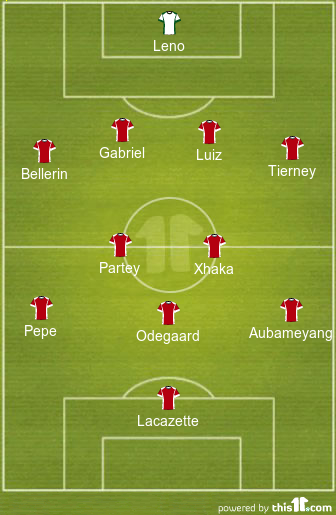