Manchester United take on Tottenham in north London on Sunday afternoon. Here is the line-up we think Ole Gunnar Solskjaer will select

Manchester United take on Tottenham in north London on Sunday afternoon. Here is the line-up we think Ole Gunnar Solskjaer will select for the game:

Goalkeeper: David De Gea was recalled to start against Granada in the Europa League on Thursday night but Dean Henderson is expected to come back into the starting eleven tomorrow as he’s now being tipped as United’s No.1 goalkeeper.

Defence: Eric Bailly remains out after testing positive for Covid so I don’t think we’ll see any changes to the back four that started during Man Utd’s Europa League quarter-final victory in Spain last week.

Victor Lindelof should continue alongside Harry Maguire in the middle of defence while Aaron Wan-Bissaka will once again start at right-back. Luke Shaw was substituted at half-time against Granada due to a minor issue so he’ll be assessed to see if he can start against Tottenham. Alex Telles is an option to come in but Shaw is expected to be passed fit.

Midfield: Paul Pogba picked up a knock against Granada but the Frenchman is expected to recover in time to start against Spurs. Scott McTominay could be given a rest so Fred is set for a recall to start alongside Pogba in the Man Utd midfield.

Bruno Fernandes will no doubt start once again in the attacking midfield role against Tottenham so Donny van de Beek will have to settle for a place among the substitutes yet again.

Attack: Marcus Rashford has been carrying an injury in recent weeks and Solskjaer admitted after the game on Thursday that the strikers foot was ‘sore’ so he’ll need to be checked over. This is a big game for Manchester United so I expect Rashford to start but he may not last the full ninety minutes.

Anthony Martial is out with a knee injury but Edinson Cavani is pushing for a recall and he could replace Mason Greenwood up front against Tottenham tomorrow.

Daniel James may keep his place on the right flank so the likes of Greenwood, Amad Traore and Juan Mata may have to settle for places on the bench. 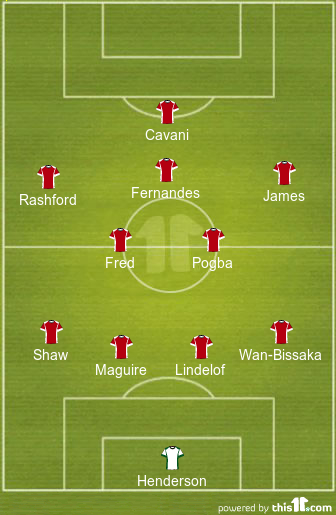