Tottenham will take on Man Utd at the New Tottenham Stadium on Sunday afternoon. This is the team we expect Jose Mourinho to select for the game:

Tottenham will take on Man Utd at the New Tottenham Stadium on Sunday afternoon. This is the team we expect Jose Mourinho to select for the game:

Goalkeeper: Hugo Lloris will no doubt keep his place between the sticks tomorrow so Joe Hart will have to settle for a place among the Tottenham substitutes against Man Utd.

Defence: Toby Alderweireld is available again after not being involved against Newcastle United last time out. However, Joe Rondon could keep his place alongside Davinson Sanchez in the middle of the Tottenham defence.

Ben Davies remains out with a calf injury so Sergio Reguilon should retain his place at left-back while Japhet Tanganga could start at right-back ahead of Serge Aurier with Matt Doherty still out with a muscle issue.

Midfield: I don’t think we’ll see any changes in midfield tomorrow with Spurs once again lining-up with Tanguy Ndombele alongside Pierre-Emile Hojbjerg.

Therefore, Harry Winks and Moussa Sissoko will have to settle for places on the bench against Manchester United.

Giovani Lo Celso is fully fit again and he could keep his place in the Tottenham starting eleven tomorrow with Dele Alli left on the bench.

Forward: We should see at least one change in the Tottenham attack with Hueng-min Son recalled to start against Man Utd having been named among the substitutes during the 2-2 draw at Newcastle.

Erik Lamela is also pushing for a recall so we could see Carlos Vinicius and Lucas Moura making way with Son and Lamela supporting Harry Kane up front. 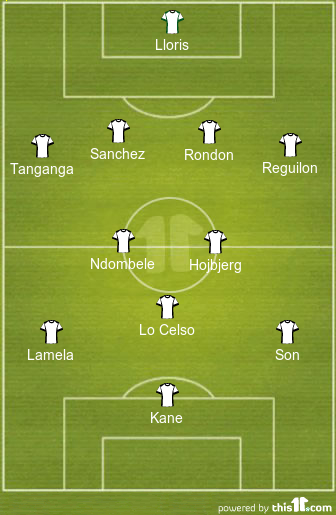