Chelsea take on West Ham at the London Stadium on Saturday evening. Here is the team we expect Thomas Tuchel to select for the game:

Chelsea take on West Ham at the London Stadium on Saturday evening. Here is the team we expect Thomas Tuchel to select for the game:

Goalkeeper: Kepa Arrizabalaga kept his place for the draw with Brighton in midweek having also played in the FA Cup semi-final win over Man City. However, Edouard Mendy is set to be recalled between the sticks tomorrow.

Defence: Cesar Azpilicueta was given a rare rest during the 0-0 draw with Brighton but the experienced Spaniard should come back into the Chelsea defence tomorrow evening.

Thiago Silva is also be back in contention after not being risked on Tuesday night due to muscle fatigue. Antonio Rudiger should keep his place so Kurt Zouma and Andreas Christensen would be the men to make way if Silva and Azpilicueta are both recalled against West Ham.

Midfield: Ben Chilwell was given a breather last time out so he’s expected to come back into the Chelsea starting eleven. Marcos Alonso will drop to the bench while Reece James should keep his place on the opposite flank.

Mateo Kovacic has been missing recently with a thigh injury and he’s been ruled out once again tomorrow. However, N’Golo Kante is pushing for a recall after being on the bench against Brighton in midweek.

Jorginho will keep his place at the heart of the Chelsea midfield so Mason Mount could be the player to make way for Kante’s return.

Attack: Mount is still likely to retain his place in Tuchel’s side as he’s been a key player for the Blues this season so he could move into one of the attacking midfield positions tomorrow.

Timo Werner is pushing for a recall so he could come in to join Mount in the front three. Kai Havertz may also keep his place so Christian Pulisic could therefore drop to the bench along with Hakim Ziyech. 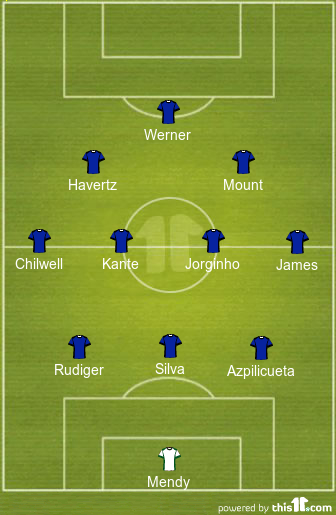