Manchester United take on Liverpool at Old Trafford on Thursday night. Here is the line-up we think Ole Gunnar Solskjaer will select for the game:

Manchester United take on Liverpool at Old Trafford on Thursday night. Here is the line-up we think Ole Gunnar Solskjaer will select for the game:

Goalkeeper: Dean Henderson was rested for the defeat to Leicester City on Tuesday night so he should be recalled against Liverpool with David De Gea dropping to the bench.

Defence: Man Utd play just 48 hours after losing to Leicester so Solskjaer is expected to rotate his squad with a number of key players recalled after being rested on Tuesday evening.

Luke Shaw will come in at left-back against Liverpool with Alex Telles making way while Aaron Wan-Bissaka is set to be recalled in place of Brandon Williams at right-back.

United have been dealt a big blow with the news that Harry Maguire will miss the rest of the domestic season. His absence should open the door for Eric Bailly to stake his claim for a regular first team shirt and he’s likely to keep his place against Liverpool. However, Victor Lindelof should be recalled in the Man Utd defence with Axel Tuanzebe making way.

Midfield: Manchester United will recall Fred and Scott McTominay so Nemanja Matic and Donny van de Beek are set to drop to the bench after rare Premier League starts on Tuesday night.

Bruno Fernandes was also given a well-deserved rest last time out but the Portuguese international is expected to be recalled against Liverpool with Juan Mata making way.

Attack: Youngsters Amad Diallo and Anthony Elanga made their full debuts for Man Utd on Tuesday but they’ll drop out tomorrow night. Paul Pogba should take up his place on the wing while Marcus Rashford is also set for a recall.

Mason Greenwood was on target with a fine strike against Leicester but the youngster is still expected to drop to the bench against Liverpool with Edinson Cavani recalled up front. 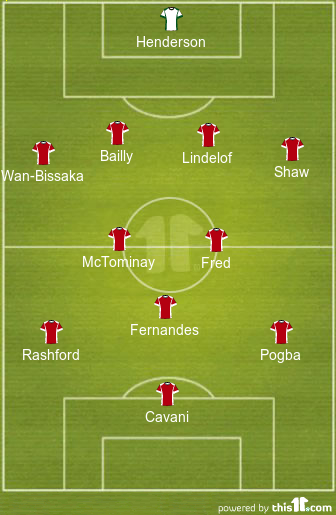