Chelsea take on Brentford at the Brentford Community Stadium on Saturday evening. Here is the team we expect Thomas Tuchel to select for the game:

Chelsea take on Brentford at the Brentford Community Stadium on Saturday evening. Here is the team we expect Thomas Tuchel to select for the game:

Goalkeeper: Edouard Mendy is set to once again keep goal for Chelsea so Kepa Arrizabalaga will have to settle for a place on the bench.

Defence: Chelsea have been dealt a double blow in defence with two key players ruled out of the trip to Brentford this weekend. Thiago Silva won’t be involved after playing for Brazil during their World Cup qualifying victory over Uruguay in the early hours of Friday morning.

Tuchel has also confirmed Antonio Rudiger will be missing tomorrow evening after he picked up a back injury while away with the German squad during the international break.

Therefore, youngster Trevoh Chalobah is expected to start in the Chelsea back three alongside Andreas Christensen and Cesar Azpilicueta this weekend.

Midfield: With Azpilicueta starting in defence, Reece James is set for a recall in the right wing-back position after recovering from an ankle injury while Ben Chilwell could keep his place on the left after scoring against Southampton last time out. Marcos Alonso may have to settle for a place among the Chelsea substitutes.

Tuchel is booted by the return of N’Golo Kante to full fitness so the Frenchman is expected to start in midfield while Jorginho is also set for a recall after being named on the bench against Southampton before the break.

Mateo Kovacic is another option for the Chelsea boss but he may have to settle for a place on the bench alongside Saul Niguez and Ruben Loftus-Cheek.

Attack: Chelsea have been handed a big boost in attack as Romelu Lukaku has been passed fit after complaining of a muscle issue while away with Belgium so he’s expected to lead the line up front against Brentford.

Mason Mount should be recalled to start in attack while Kai Havertz could also get the nod after being an unused substitute last time out so Callum Hudson-Odoi may drop out.

Hakim Ziyech is set to miss out with illness and Christian Pulisic is still not fully recovered from a foot injury but Timo Werner will be an option from the bench for Tuchel. 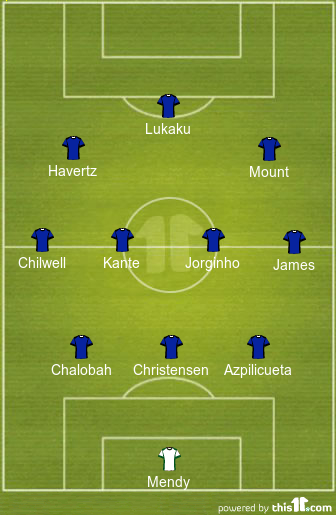