The Blues returned from the international break with a hard-fought 1-0 league win at Brentford. They will be aiming to keep the momentum with a victory against Malmo.

The clubs previously met in the round of 32 of the 2018/2019 Europa League campaign. The Blues had the upper hand as they beat them in both legs (5-1 aggregate win).

Here is how they could line up against Malmo tomorrow.

Goalkeeper: Edouard Mendy has been a revelation for the Blues since arriving from Rennes last year. He recently kept his 30th clean sheet in just his 54th appearance.

The Senegal international had to work hard for it with three outstanding saves to deny Brentford from equalising. He is expected to start in goal ahead of Kepa Arrizabalaga tomorrow.

Defence: Both Antonio Rudiger (back) and Thiago Silva (arrived late from international duty) missed the recent west London derby against Brentford on the road.

The pair are now available for selection, and could make the starting line-up. They are likely to accompany Andreas Christensen in the back three, replacing Trevoh Chalobah and Malang Sarr.

The rest of the backline should remain unchanged. Reece James has just returned after an ankle injury. Cesar Azpilicueta may continue to get the nod for the right wing-back position.

It has been a tremendous turnaround for Ben Chilwell, having been completely ignored earlier this term. He has scored in back-to-back games, and looks certain to start ahead of Marcos Alonso at left wing-back.

Midfield: Jorginho appears likely to take up one of the midfield roles, having been an unused substitute at the weekend following his international exploits for Italy.

N’Golo Kante has been his regular partner, but the Frenchman could be handled with caution amid his injury troubles when he has been played extensively.

Mateo Kovacic and Ruben Loftus-Cheek are probable candidates to accompany Jorginho, but Thomas Tuchel could make the surprise choice to start Saul Niguez.

Saul has barely played in the Premier League amid adaptability concerns. He is well versed to Champions League football and could be handed valuable minutes.

Attack: Mason Mount could make his first start in a month from the attacking midfield position. He could be partnered by Kai Havertz, who still has plenty to prove.

The German ended last season on a high with the Champions League winning goal, but he has continued to struggle for consistency that has limited his playing time.

Romelu Lukaku looks set to start ahead of them as the lone striker. The Belgian has gone six games without scoring for the club and will be desperate to end the run. 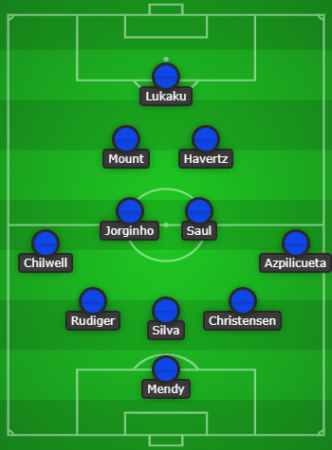