Chelsea are back in Champions League action when they take on Malmo on Tuesday evening. Here is the team we expect Thomas Tuchel to select for the game:

Chelsea are back in Champions League action when they take on Malmo at the Eleda Stadion on Tuesday evening. Here is the team we expect Thomas Tuchel to select for the game:

Goalkeeper: Kepa Arrizabalaga may be eyeing a start in Europe tomorrow but Edouard Mendy is expected to once again start between the sticks for the Blues.

Defence: Chelsea are likely to make some changes in defence with Thiago Silva given a rest while Antonio Rudiger could also be protected ahead of Saturday’s Premier League clash with Burnley.

Trevoh Chalobah is expected to be recalled and Malang Sarr could also make a rare start with Andreas Christensen the only survivor from the back three that started during the 3-0 win at Newcastle United.

Midfield: Reece James scored two superb goals for Chelsea at the weekend but he might still be rested with Cesar Azpilicueta coming in to start in the right wing-back position against Malmo.

Marcos Alonso is also set for a recall with the Spaniard replacing Ben Chilwell on the left flank. N’Golo Kante could be given a breather as Tuchel looks to protect his fitness.

Mateo Kovacic is once again ruled out with a thigh injury so Saul Niguez could be given a run out tomorrow night. Ruben Loftus-Cheek is another option for the Chelsea boss but he may have to settle for a place on the bench with Saul lining-up alongside Jorginho in the middle of the park.

Attack: Chelsea have been dealt a big blow with the news that Romelu Lukaku remains on the sidelines with an ankle injury while Timo Werner is another absentee for the Londoners as he’s still nursing a thigh problem.

Mason Mount has also been ruled out of the trip to Sweden due to illness which saw him miss the Newcastle game but Christian Pulisic is back in the squad after finally overcoming a niggling ankle injury.

The US international has been out for a number of weeks so he may only be named on the bench with Callum Hudson-Odoi and Hakim Ziyech continuing to support Kai Havertz in the Chelsea attack. 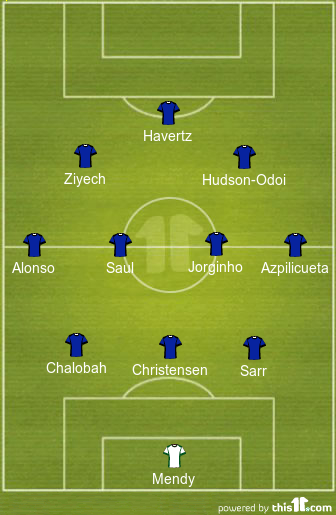