Premier League football returns as Liverpool welcome Arsenal to Anfield on Saturday evening. Here is the team we expect Jurgen Klopp to select for the game:

Premier League football returns as Liverpool welcome Arsenal to Anfield on Saturday evening. Here is the team we expect Jurgen Klopp to select for the game:

Goalkeeper: Alisson Becker is set to continue between the sticks so Caoimhín Kelleher will be the Brazilian’s back-up among the substitutes.

Defence: Liverpool have a major doubt hanging over Andrew Robertson after he picked up a thigh injury while playing for Scotland during the international break. The full-back is tipped to miss out this weekend so Kostas Tsimikas is set to deputise at left-back against Arsenal.

Trent Alexander-Arnold will continue at right-back and he’ll be in confident mood after setting up three goals for England on Monday night. Joel Matip is favourite to start alongside Virgil van Dijk in the middle of Liverpool’s defence so Ibrahima Konate may have to settle for a place on the bench. Joe Gomez is a doubt with a hamstring problem.

Midfield: Jordan Henderson will need a late fitness test after withdrawing from the England squad with a minor groin injury. The Liverpool skipper has trained in recent days so Klopp will hope Henderson is fit to face Arsenal on Saturday.

Fabinho will keep his place in the holding role but we could see Thiago Alcantara come into the starting eleven. Alex Oxalde-Chamberlain may be the man to make way if the Spaniard is handed a start.

Naby Keita remains a doubt due to a thigh injury that’s hampered him in recent weeks while James Milner is another player who’ll need a late fitness test. However, Curtis Jones and Harvey Elliott are ruled out for Liverpool.

Forward: Klopp was handed a major injury scare last week after Sadio Mane was sent back early from international duty having picked up a rib injury while playing for Senegal. The good news is the attacker has trained at Melwood and is expected to be fit to start against Arsenal.

Liverpool will be without Roberto Firmino as he’s still nursing a thigh injury so Diogo Jota will lead the line up front. Mohamed Salah is in sensational form so Klopp will be hoping for more of the same against Arsenal this weekend.

Takumi Minamino will be an option on the bench for the hosts and Divock Origi is expected to be in the squad having recovered from a dead leg. 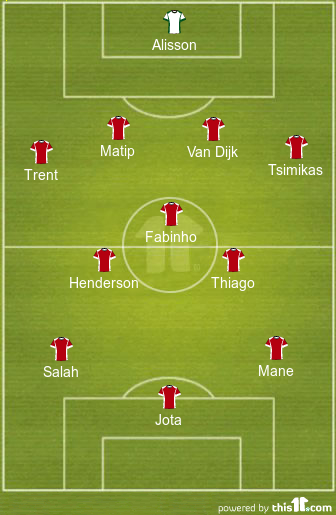