Chelsea take on Chesterfield at Stamford Bridge on Saturday evening in the third round of the FA Cup. Here is the team Thomas Tuchel is expected to select:

Goalkeeper: Edouard Mendy is away at the African Cup on Nations so Kepa will be Chelsea’s No.1 for the next few games. Therefore, the Spaniard is unlikely to be risked tomorrow meaning Marcus Bettinelli is set for a rare start in goal.

Defence: Tuchel has problems in defence as Trevoh Chalobah is out with a thigh injury while Thiago Silva is set to miss out once again due to a positive covid test which ruled him out of the Carabao Cup win over Tottenham on Wednesday night.

However, the good news for Chelsea is that Andreas Christensen is expected to recover from a back issue to return in defence while Cesar Azpilicueta is also available despite being forced off with cramp in midweek.

Tuchel is tipped to revert to a back three having gone with a flat back four against Spurs so Malang Sarr could keep his place to line-up alongside Azpilicueta and Christensen. Antonio Rudiger is expected to be rested.

Midfield: Chelsea will still be without Ben Chilwell due to a serious knee injury while Reece James is also missing with a thigh problem. Marcos Alonso is expected to be given a rest so Saul Niguez may be deployed out wide.

Callum Hudson-Odoi could occupy the other wide position for Chelsea with Ruben Loftus-Cheek recalled to start in midfield. N’Golo Kante is out with covid while Mateo Kovacic and Jorginho are likely to be rested so Ross Barkley could get a rare start.

Attack: Chelsea are likely to give Romelu Lukaku a breather after he made his return against Tottenham so Timo Werner is in-line for a recall to start up front for the west Londoners after recently returning from injury.

Kai Havertz and Mason Mount are expected to make way along with Hakim Ziyech so Christian Pulisic could be handed a recall in attack. 18-year-old Harvey Vale could also be given a start for Chelsea after impressing off the bench in midweek. 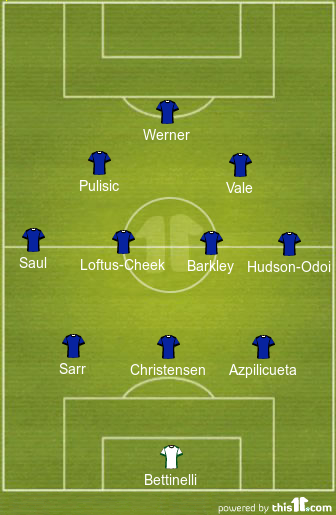