Chelsea face off against Liverpool in Sunday’s Carabao Cup final at Wembley Stadium. Here is the line-up Tuchel is expected to select.

Chelsea face off against Liverpool in Sunday’s Carabao Cup final at Wembley Stadium.

The Blues have picked up momentum over the past month, having won six straight games across all competitions. They have not scored too many goals, but have been solid at the back.

Chelsea will be aiming to win the League Cup for the sixth time in their history this weekend, but face a stiff challenge against Liverpool, who have picked up nine straight wins heading into the final.

Here is how Chelsea could line up against Liverpool on Sunday:

Goalkeeper: Kepa Arrizabalaga has played every minute of the club’s Carabao Cup campaign. The club-record £72m signing could get the nod over regular choice Edouard Mendy, having previously missed out on starting the Club World Cup final despite making a decisive intervention against Al Hilal.

Defence: Liverpool are coming off a stunning 6-0 win over Leeds United. With their attack flourishing, manager Thomas Tuchel could go with a back three once again. Thiago Silva, Antonio Rudiger and Andreas Christensen appear nailed-on starters on current form.

Reece James could make his surprise return at right wing-back ahead of Cesar Azpilicueta. The £49.5m star has trained for just two sessions after his hamstring injury, but Tuchel has hinted that he may start the England international.

Marcos Alonso may feature in the left wing-back role ahead of Malang Sarr and Callum Hudson-Odoi. Sarr has impressed for Chelsea in a makeshift defensive position, but has largely operated as a left-back.

Midfield: Mateo Kovacic picked up a knock to his back in the midweek Champions League clash against Lille, but has returned to full training. The Croatian appears likely to partner N’Golo Kante once again. The Frenchman had a dominant display against Lille, capped with an assist.

Attack: Hakim Ziyech has been in sublime touch lately, scoring in three straight league games. He suffered an Achilles injury scare in midweek, but has been deemed fit by Tuchel. The Moroccan should start in one of the two attacking positions behind the main Chelsea striker.

Christian Pulisic is likely to partner Ziyech after registering a goal and an assist against Lille earlier this week. Kai Havertz is expected to lead the line over Romelu Lukaku and Timo Werner, having bagged the early goal in the 2-0 triumph over the French champions. 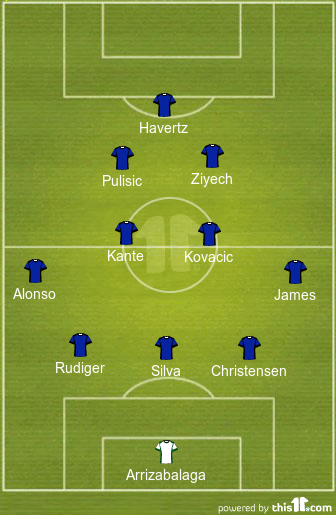