Liverpool welcome Inter Milan to Anfield for the second leg of their Champions League round of 16 tie tomorrow. Here is the expected line-up

Liverpool welcome Inter Milan to Anfield for the second leg of their Champions League round of 16 tie on Tuesday night.

The Merseyside giants secured an impressive 2-0 win over the Serie A champions in the reverse meeting at San Siro, and they are now in a strong position to make the last eight of the European competition.

However, manager Jurgen Klopp won’t be taking things lightly. Inter recently ended a five-game winless run with a 5-0 triumph over Salernitana. Edin Dzeko and Lautaro Martinez shared the goals between them.

Here is how Liverpool are expected to line up:

Goalkeeper: Alisson Becker has been Liverpool’s undisputed choice for the Premier League and European games when fit. He had a comfortable game at San Siro where Inter failed to register a single shot on target, and will be hoping for a similar evening.

Defence: Trent Alexander-Arnold and Andy Robertson are assured starters in the full-back positions. Klopp is unlikely to mull over any changes. At the heart of the defence, Ibrahima Konate should continue to partner Virgil van Dijk with Joel Matip having just returned from an illness. Konate and Van Dijk were instrumental in the first leg as they nullified the attacking threat of Dzeko and Martinez.

Midfield: Fabinho has been an almost ever-present figure in the centre of the park. Captain Jordan Henderson is likely to start alongside the Brazilian. Henderson has made his last two European appearances off the bench, but should be fancied to make the XI. The England star has registered two assists in his last three league appearances.

Naby Keita looks primed to occupy the third midfield position after impressing in Liverpool’s 1-0 win over West Ham. The 27-year-old completed 95 per cent of his passes, and made a vital tackle to deny a clear-cut scoring chance for Michail Antonio. He is likely to get the nod over Thiago Alcantara, who may not be rushed back to the line-up after his minor muscle injury.

Attack: Mohamed Salah had a frustrating performance against the Hammers and was substituted towards the end. However, it is highly unlikely that he will be benched. The Egyptian and Sadio Mane, who bagged the winner, are pretty much confirmed starters for Liverpool.

If Klopp does consider a change, Diogo Jota could come in for Luis Diaz. Mane has played up front to accommodate the club’s winter signing on the left flank. The Senegal star could move to his preferred left-wing position if the 25-year-old gets the nod to lead the attack. Roberto Firmino is available after a hamstring injury, but may have to settle for a bench role. 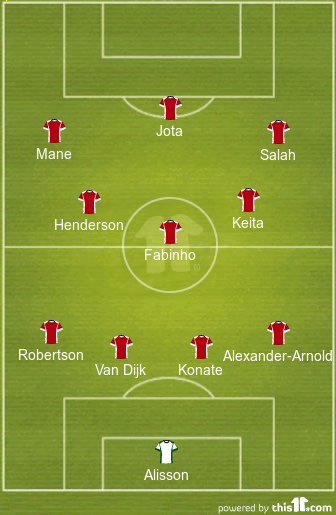