Chelsea take on Middlesbrough in the quarter-finals of the FA Cup on Saturday evening. Here is the team Thomas Tuchel is expected to select:

Chelsea take on Middlesbrough in the quarter-finals of the FA Cup on Saturday evening. Here is the team Thomas Tuchel is expected to select:

Goalkeeper: Edouard Mendy started during Chelsea’s Champions League win over Lille on Wednesday night but he’s expected to be rested this weekend with Kepa Arrizabalaga recalled.

Defence: Tuchel is expected to hand Thiago Silva a rest while Andreas Christensen could also be given a breather so there will be changes in the Chelsea back line this weekend.

Trevoh Chalobah is back in contention after making his return off the bench during the 2-1 win at Lille on Wednesday night. Malang Sarr is also pushing for a recall so they could come in to join Antonio Rudiger in defence on Saturday.

Midfield: Reece James didn’t travel to France for the Champions League second leg in midweek so he’s unlikely to be risked from the start against Middlesbrough. Cesar Azpilicueta started on the right on Wednesday but he may be rested this weekend.

Callum Hudson-Odoi is an option for Tuchel but we could see Hakim Ziyech recalled to start on the right flank. Marcos Alonso could keep his place on the left ahead of Kenedy.

Chelsea went with three central midfielders away to Lille with N’Golo Kante, Jorginho and Mateo Kovacic all starting. Kante is expected to be rested for the FA Cup tie but Jorginho and Kovacic could keep their places for the quarter-final.

Saul Niguez and Ruben Loftus-Cheek are options if Tuchel wants to freshen things up but this is Chelsea’s last game before the international break and they have the opportunity to reach a semi-final, so we expect the Blues boss to field a strong side.

Attack: Christian Pulisic netted at Lille last night but he might be rested this weekend while Kai Havertz has earned a well earned breather as well.

Romelu Lukaku is likely to be recalled up front while Mason Mount is also pushing to start after the 23-year-old was selected on the bench for the Champions League clash on Wednesday night.

Timo Werner is another player tipped to be recalled with the German international supporting Lukaku and Mount in the Chelsea attack against Middlesbrough. 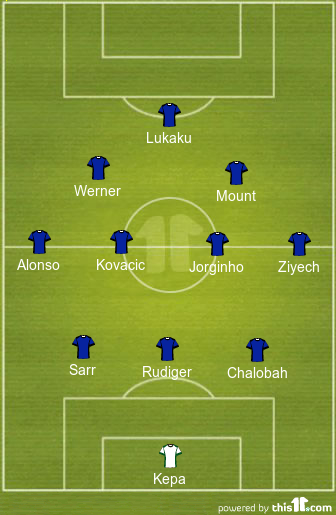