Liverpool take on Benfica in the first leg of their Champions League quarter-final on Tuesday night. Here is the team we expect Jurgen Klopp to select:

Liverpool take on Benfica in the first leg of their Champions League quarter-final on tonight. Here is the team we expect Jurgen Klopp to select:

Goalkeeper: Alisson Becker is an assured starter for Liverpool as he’ll line-up between the sticks once again. Caoimhin Kelleher remains on the bench.

Defence: Trent Alexander-Arnold didn’t feature during the 2-0 win over Watford at the weekend after making a swift recovery from a hamstring injury. The youngster is now ready for a recall and should start at right-back. Joe Gomez will drop out despite his positive showing against Watford.

Andrew Robertson will keep his place at left-back for Liverpool but Klopp may rotate in the middle of defence with Ibrahima Konate coming in alongside Virgil van Dijk. Joel Matip may therefore drop to the bench.

Midfield: Fabinho came off the bench to score during Liverpool’s win against Watford but he’ll be recalled to start in the holding role this evening. Jordan Henderson played 90 minutes at the weekend but he’s expected to keep his place against Benfica.

Curtis Jones was forced off with a knock at the weekend but he’s been passed fit to make the trip. However, he’s expected to drop to the bench to make way for Fabinho. Naby Keita is pushing for a recall after recovering from a knee issue but he’ll probably have to make-do with a place on the bench as Thiago Alcantara should keep his place.

Harvery Elliott, James Milner and Alex Oxlade-Chamberlain will be other midfield options for Klopp to call upon from the bench if needed.

Attack: Liverpool have an abundance of talent on offer in attack so Klopp is likely to freshen things up. Sadio Mane is expected to be recalled after being named on the bench at the weekend.

Luis Diaz is also in-line for a recall so Mane may start through the middle with Diogo Jota and Roberto Firmino dropping out. Mohamed Salah should keep his place on the right flank. 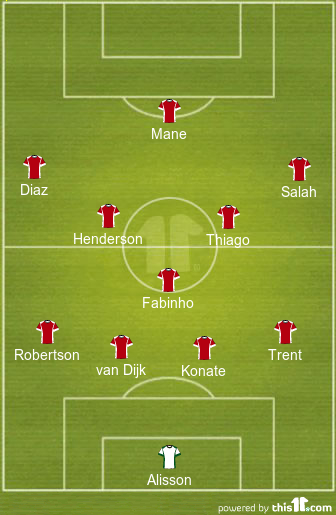