Manchester United take on Arsenal at the Emirates Stadium on Saturday lunchtime. Here is the line-up we expect Ralf Rangnick to select for the game.

Manchester United take on Arsenal at the Emirates Stadium on Saturday lunchtime. Here is the line-up we expect Ralf Rangnick to select.

Goalkeeper: David De Gea will have been disappointed to have conceded four goals against Liverpool last time out but the Spaniard is certain to keep his place ahead of Dean Henderson this weekend.

Defence: Man Utd will assess the fitness of Raphael Varane as the French international aims to make his return to action following a four-game absence. Varane returned to training on Thursday so is expected to be recalled to start against Arsenal on Saturday with Victor Lindelof dropping out.

Rangnick went with a back three/five against Liverpool on Tuesday night but it didn’t work so he is expected to revert to a back four this weekend. Harry Maguire will keep his place so Phil Jones is the man set to make way.

Aaron Wan-Bissaka could retain his place at right-back due to his defensive attributes. Luke Shaw is facing a race against time to play again this season after having bolts removed from his ankle. Alex Telles is in-line for a recall against Arsenal so Diogo Dalot will drop to the bench.

Midfield: Manchester United are set to be without Paul Pogba after he limped off at Anfield in midweek. Fred is also expected to miss the trip to Arsenal due to a groin injury.

However, Scott McTominay is back in contention so the Scottish international should partner Nemanja Matic in the middle of the park on Saturday afternoon.

Bruno Fernandes had another frustrating game against Liverpool but the Portuguese international should still retain his place in the attacking midfield position for Man Utd at the Emirates. Therefore, the likes of Jesse Lingard and Juan Mata will have to settle for places on the bench once again.

Attack: Cristiano Ronaldo is back in training after missing the Liverpool defeat following the devastating loss of his newborn son. Rangnick will want to assess the strikers state of mind before making a decision over his involvement against Arsenal but knowing Ronaldo, he’ll do all he can to play this weekend.

Jadon Sancho is expected to be recalled after being surprisingly benched at Anfield. Anthony Elanga may get the nod on the opposite flank so Marcus Rashford may find himself dropping to the Man Utd bench. 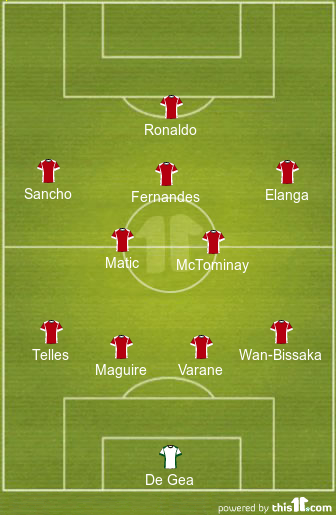