Manchester United have identified Barcelona midfielder Frenkie de Jong as one of their priority targets for the summer transfer window. 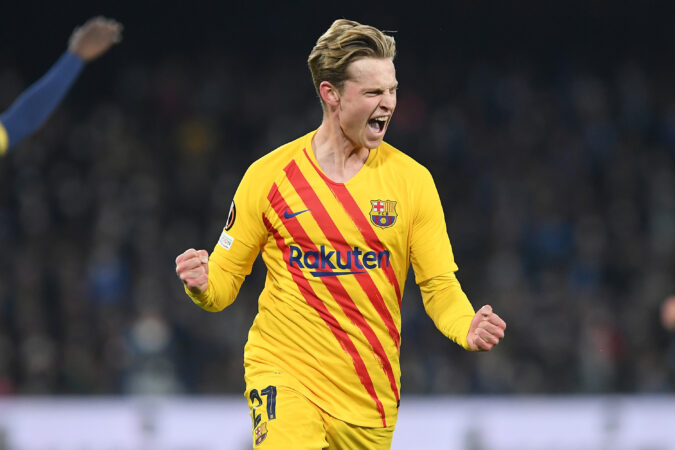 The Red Devils recently confirmed the appointment of Erik ten Hag as their permanent manager. The Dutchman will officially take charge at the end of the campaign.

Amidst this, there has already been speculation over potential targets and Sport reports that Man Utd are looking to reunite De Jong with his former Ajax head coach.

Barcelona are not considering the sale of De Jong at the moment, but it has been highlighted that they need to make a big sale to balance their financial books before June 30.

De Jong is currently happy with the proceedings at Camp Nou, but the scenario could change this summer owing to his excellent bond with Ten Hag during his Ajax days.

Barcelona bought him for €75m (£63m) plus €11m (£9m) in add-ons in 2019. It is claimed in the report that United will need to make an offer higher than that figure to test the Blaugrana’s resolve.

If De Jong heads for the exit door, the Catalan giants are likely to target Valencia’s Carlos Soler.

United have a huge rebuilding job this summer. Nemanja Matic has confirmed that this will be his final season while Paul Pogba is also likely to leave when his deal expires on June 30.

Ten Hag has been fancied to sign more ‘technical players’ and De Jong could be an ideal signing with his impressive distribution and ability to make goal contributions.

The 24-year-old has successfully completed over 91 per cent of his passes for Barcelona this term. He has also registered five goals and four assists from 42 games in all competitions.

He will cost a premium fee. It could potentially be a nine-figure sum, but Ten Hag may have the funds to pursue his services. The board are reportedly willing to hand him with a £210m transfer kitty.

A defensive midfielder should be the prime priority for Ten Hag, but a new centre-forward and central defender should also be recruited by Man Utd during this summer’s transfer window.

There has been an over-dependence on Cristiano Ronaldo this season. Despite his 15 league goals, United find themselves outside of the top-four places at the moment.

With Ronaldo no longer in the prime of his career, a young striker is also essential for Manchester United. Meanwhile, a centre-back could be pursued amid the defensive woes this term.

Raphael Varane has failed to stay fit over an extended period while Harry Maguire, Victor Lindelof, Eric Bailly and Phil Jones have all been inconsistent with their displays.

A left-footed central defender could be prioritised. Pau Torres of Villarreal seems back on the club’s radar. United preferred to sign Varane over him last summer.