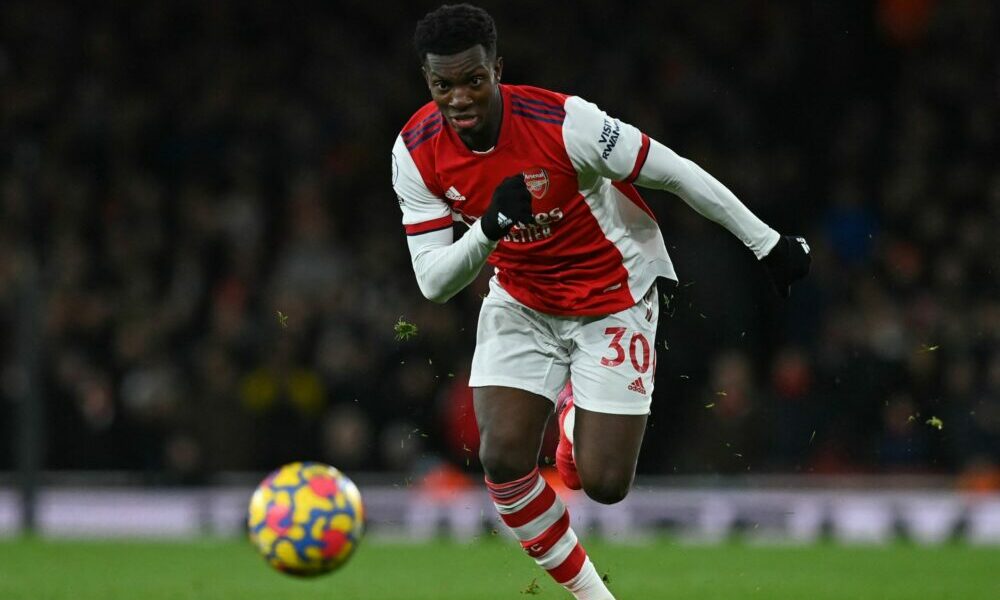 Arsenal manager Mikel Arteta heaped praise on Eddie Nketiah after his brace against Leeds United in the Premier League on Sunday.

The Gunners graduate was in fine form against his former club, finding the back of the net in the 5th and 10th minute respectively.

In the 27th minute, Arsenal were handed a bigger advantage with Luke Ayling being sent off, but unfortunately failed to capitalise.

They were made to rue for missing scoring chances which paved the way for a nervous finish in the end.

Diego Llorente netted for Leeds in the 66th minute. It was the first goal conceded from a direct corner by the Gunners all season.

The Whites could have snatched a draw in the dying seconds but fortunately, Rodrigo’s header fell into Aaron Ramsdale’s grasp.

Nketiah was undoubtedly the difference in the end with his two goals ensuring the Gunners having a healthy lead over Tottenham.

Arteta was delighted with his showing, and added things will happen naturally when pressed about the striker’s future at the club.

He told Arsenal.com: “Eddie is doing what he’s done all season, he’s been very consistent, with his performances and how little he is giving things away! Let him be, let him enjoy the moment because he completely deserves it and things will happen naturally.”

Nketiah was largely a late substitute at the beginning of the year with Alexandre Lacazette regularly leading the line for the Gunners.

However, an injury for the Frenchman handed Nketiah the chance at Chelsea and he has not looked back since with quality displays.

The 22-year-old netted a brace against the Blues in a 4-2 victory and also came close to scoring against Man Utd and West Ham.

He has now continued his fine form with another brace against Leeds which has put the Gunners four points clear of Tottenham.

Arsenal’s next league game will come on the road to Spurs on Thursday. A victory would guarantee Champions League qualification.

Any other result would still see the Gunners in the driving seat for the final two games of the season against Newcastle and Everton.

Regardless of what happens, the hierarchy must seriously think about convincing Nketiah to put pen-to-paper on a new contract.

Arsenal are likely to pursue at least one marquee striker. Nketiah could provide quality competition judging by recent performances.