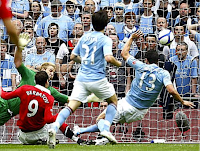 From the outset, Manchester United’s chances of reaching the FA Cup Final this season were stacked against them, but the performance against City was pitiful to say the least. Dimitar Berbatov, Michael Carrick and Paul Scholes will all receive justified criticism for their respective roles in United’s disenchanted defeat to City, but to be fair, it was inferior team performance by everyone in a red shirt.

One would have thought, and really hoped, that the momentum from their impressive performance in the UEFA Champions League would have carried over to the FA Cup, but that was clearly just wishful thinking and definitely was not the case.

Losing to your rival, especially one that has never won anything in 35 years, is never an easy pill to swallow, but the way that no United player took the game by the scruff of its neck was concerning.

Before the match, Sir Alex Ferguson fluffed all of his player’s feather by stating that his entire squad has desire and belief to overcome the toughest of times. Serving the final match of his five-match ban, Sir Alex had a bird’s eye view of his player’s performances, or lack there of, which will definitely not sit well with him.

This type of effort, mostly away from Old Trafford, has become prevalent way too many times this season, and they need to change that quickly. Even though it is not on the same type of level, because of the significance of the competition, the result felt very similar to the way United lost to Barcelona in the 2009 UEFA Champions League Final.

United faced the cruel reality of football, because if a team does not take their chances, they will be punished and that is exactly what City did.

The Reds should have been in the lead, but two blown chances from Berbatov left United frustrated and it allowed City to grow in confidence. When a team knows and realize that they should have been down a goal and they aren’t, they get a surge of energy by that lifeline.

Berbatov, who has been the odd-man out for the last month and a half, should have increased his season’s scoring total twice, but it was certainly not his day and the Reds suffered because of his misses. By now every United supporter should know that the 21-goal hit man’s performances hinge on confidence and how he feels is contributing, and Berbatov was, again, his own worst enemy against City.

Everyone, no matter what the situation we are faced with, knows when they have let their team down, but Berbatov is very hard on himself when he does such a thing, which Ferguson should have sensed. The United manager should have seen the Bulgarian’s shoulders drop when he missed the sitters and brought on either Javier Hernandez or Michael Owen in his place.

As he has earned the right, Ferguson chose not to make that change, and the Reds authority went from commanding to completely non-existent, and City never really looked to be threatened.

At the other end, City were starting to find pockets of space and challenging the Reds defensively with varying types of attack. There were two long-range shots from Mario Balotelli and Vicent Kompany that came close close to giving City the advantage, but in the second half they decided to press forward and force United into making mistakes, which resulted in the deciding goal.

First, a sketchy back pass from Rio Ferdinand rushed Edwin van der Sar into making a hurried clearance, which fell to David Silva, who should have struck it first time, but thankfully, John O’Shea nipped in front of him to kill it off. However, O’Shea touch went straight to Carrick, who carelessly played a lame duck pass to Scholes and Yaya Toure graciously pounced on it and put City in the lead.

After the goal, City had United’s defense shaking uncontrollably, but the Reds held off the onslaught and looked to be getting back in the match especially after Nani’s free-kick rattled the Blues’ crossbar. However, that momentum was short-lived due to a typical, but very costly challenge by Scholes that resulted in the ginger-headed midfielder receiving a straight red. Mike Dean, who sent Rafael off for a debatable second yellow against Tottenham in January, got it spot on, because Scholes did catch Zabaleta with his studs.

While every single Manchester United player should hang their head in shame after their diabolical team performance, no single Red should not be hung out to dry, because you win as a team and you lose as a team.