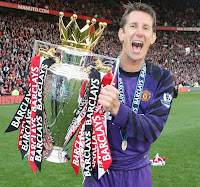 To everyone’s disappointment, Edwin van der Sar played his final match for Manchester United at Old Trafford against Blackpool, but Sir Alex Ferguson has confirmed David De Gea could be his immediate replacement.

van der Sar nearly had a change of heart a couple weeks ago, but he stayed true to his initial promise to retire, which is disheartening because of the form he showed this season, but, on the other hand, the Reds could be getting one of the best young goalkeepers in the world in De Gea.

The big Dutch shot-stopper lifted his fourth Barclays Premier League title in his six years at the club, and De Gea, who join for a cool £17million from Atletico Madrid, will look to quickly to fill van der Sar’s vacant, but still warm gloves.

In his closing remarks, the 40-year old admitted that he should have joined the club a lot sooner than he did, and De Gea, who is exactly half of van der Sar’s age, is not looking to make the same mistake as his predecessor. Maybe he learned from previous deals that have fallen through, but Ferguson showed just how much he wanted to get a feel for 20-year old as he opted to miss United’s 5-2 win over Scunthorpe to scout De Gea, himself.

Rio Ferdinand, who has played with some decent goalkeepers throughout his career – except when he was with the England national team – made a glowing remark about van der Sar, which sums up what he has brought to the club. On twitter, the United center-back said, “Respect to #edwinvandersar the best goalkeeper I have played with….cool, calm + assured.”

Even though the deal is yet to be made permanent, and van der Sar is not officially retired, Sir Alex knows just how imperative it is to find long-term replacement now. The goalkeeper is by far one of the key elements to a Manchester United team – and the club cannot experience another torrid time going seven years rotating between 11 of them again.

From the day after Peter Schmeichel made his final appearance to the day that van der Sar signed from Fulham, United stuttered and only won trophies sporadically in between. Just to prove how much Sir Alex relied on him, with his almost certain appearance in the 2011 UEFA Champions League Final, van der Sar will play in his 266th appearances, which ranks 68th on their all-time list.

Unfortunately, there will not be anymore added to that, but during his time, the 6’6″ goalkeeper won 11 medals and has a chance to go out in the best possible way as a Premier League and UEFA Champions League double winner – again!

What van der Sar, and Big Pete before him, have done is what can only be described as the intangibles, because what each of them offered rarely showed up on any stat sheet. Having such a reliable, composed goalkeeper is a necessity to being successful both domestically and abroad.

The combination of youth and experience is something that Sir Alex does not have to hem and haw about, though. That is simply down to the fact that De Gea has both. Already having secured experience in Europe’s biggest competition with Atletico, the young Spaniard also led his club to the 2010 Europa League title, which means that he will not, or at least should not, be overwhelmed by the magnitude of the occasion of playing at Old Trafford.

With two of the most experienced center-backs, Nemanja Vidic and Ferdinand, in front of him, David De Gea will have the time to gain the confidence to quickly settle in at Manchester United.