Modric to Manchester United? The Likelihood Of A Move..

Paul Scholes’s inevitable departure has been announced, and as Manchester United reflect on the wonderful achievements that Paul Scholes has reached in his 17 years at the club, Sir Alex Ferguson will have to start looking seriously, if he hasn’t alrea… 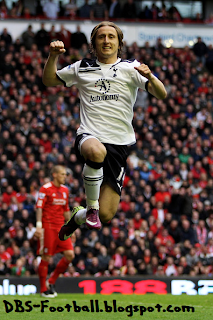 Paul Scholes’s inevitable departure has been announced, and as Manchester United reflect on the wonderful achievements that Paul Scholes has reached in his 17 years at the club, Sir Alex Ferguson will have to start looking seriously, if he hasn’t already, for his replacement. Scholes’s retirement was described as an “absolute tragedy” by Sir Bobby Charlton, and millions of United fans all over the world paid their respects to a fantastic career of the 36 year old United star, so whoever comes in will have big boots to fill.

Luka Modric has been mentioned more than a few times in connection with Manchester United, but most reports from inside the clubs or with insider knowledge seem to think that any deal is highly unlikely. The Tottenham manager recently said that he would not sell the Croation midfielder for £100 million or even a a billion pounds – a comment that should be taken with a pinch of salt as that sort of money would buy a football club.

However, Modric has a contract with the London club until 2016 so he would cost a lot of money for any club, presumably somewhere in the region of £25-35 million. Despite a possibly huge transfer fee, there remains a small possibility that Modric could make a move to Old Trafford if he is made a prime target by Sir Alex Ferguson. A Manchester United insider said a few weeks ago that the United manager has been given substantial transfer funds and “what Sir Alex wants, Sir Alex will get”, so if Ferguson really is after Modric he will put up a serious fight to get him, which is promising for United fans keen for a quick replacement for the legendary Paul Scholes.

The 25 year old recently stated that although happy at Tottenham, if an offer were to come in for him there was every possibility that he could move:

“Everybody wants to know what will happen with me. I’m trying to stay calm as my national team has a really important match coming.”

“So I will tell you the same as all ways – my club status is the same as it was before. But of course, if there will be an offer which will be good for Tottenham and for me also, then a transfer is of course possible.”

“That doesn’t mean that I’m bothered with leaving Tottenham – I’m not thinking about that every hour and every minute. I’m happy at White Hart Lane – my status is great, the fans like me and I do have everything I need.”

“But then again – when you experience playing in Champions League, you want to keep playing in this tournament.”

So from this we can take that although he is happy and comfortable at White Hart Lane, the lure of Champions League football and bigger success would certainly turn his head. If Manchester United were to show a real interest and place a bid on the table, and Modric were to kick up a fuss about a move, it would put Tottenham in a difficult situation despite having him tied down to a long contract.

They would not want to keep a player against his wishes and the amount of money that could be offered is substantial – at least a £9 million profit – possibly £19 million profit after buying him for £16 million from Zagreb in 2008.

There is also talk that Tottenham are already looking for a replacement for Modric, in the form of another Dinamo Zagreb Croation, Milan Badelj. Zagreb are apparently asking for £8.5 million for the 22 year-old deep-lying play-maker, and may have to move fast due to interest from several other clubs including Wolfsburg and CSKA Moscow.

Tottenham may just be adding to their ranks in the hope winning back that Champions League place next season, but there is also a real possibility that this is an insurance policy just in case they are forced into letting Modric go.

Chelsea are also said to be interested in Modric, and some say that a move to Chelsea is more likely as the player does not favour a move all the way to Manchester but would rather stay in London where he is settled. It may seem obvious, but any deal comes down to a significant offer and Tottenham’s willingness to sell – but an offer must be significant.

Tottenham may be purposely reluctant to sell to Manchester United, who have purchased a good few of the clubs best players in the past, including Michael Carrick and more recently, Dimitar Berbatov. However, other rumours state that the unsettled Berbatov, who was left out of United’s Champions League final squad could be used as a make weight in a deal; possibly £20 million plus Berbatov.

As you can see, there are quite a few possibilities, so we shall have to wait and see what happens in the transfer market, however, I tend to side with the pessimists on this one; despite United and Chelsea’s obvious interest and funds, Tottenham will put up a fight to keep him – he is the hub of the team and could prove invaluable.