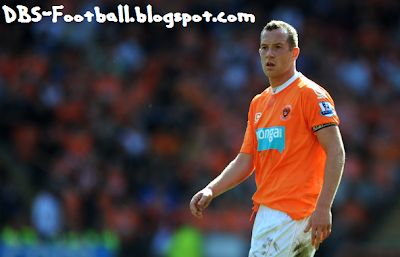 I’ve said it before, and I’ll say it again, Sir Alex Ferguson has a momentous task in replacing one of the greatest midfielder of his generation in Paul Scholes. It is a task which may turn Ferguson’s grey hair a little whiter whilst doing quite a bit of damage to United’s bank balance for transfers. This is a task, which unfortunately, will not be completed with £12 million for Charlie Adam.

Manchester United have recently been linked to the 25 year-old Scottish midfielder, who is a big target for Liverpool, and has been since January, but Sir Alex has reportedly showing a genuine interest in bringing the Blackpool “play-maker” to Old Trafford. Now, when I was watching Blackpool throughout the season, sure Charlie Adam stood out as their most effective player, and one who often posed a real threat to the opposition with his ambitious range of passing, but nothing awe inspiring was present, not much “Paul Scholes quality”.

I don’t have anything against the guy, but when United are linked to a central midfielder, especially in this transfer window, you will expect them to play at a very high standard, week in, week out. While Adam did his best to keep his club in the Premier League last season, Paul Scholes continued to do what he had been doing for 17 season’s at Manchester United; keeping the ball, creating chances and playing like a superb Spaniard, all for the biggest team in the world on the biggest footballing stage in the world.

Below is a chalkboard of Charlie Adam and his passing pattern in a game in which he was considered man of the match against Aston Villa in February. He attempted 77 passes in 90 minutes, 43 of which were successful, and 33 of which were unsuccessful, as well as one assist from a corner. Sir Alex Ferguson has said that Adam’s set pieces alone are worth £10 million – an interesting statement considering United’s apparent £12 million bid… 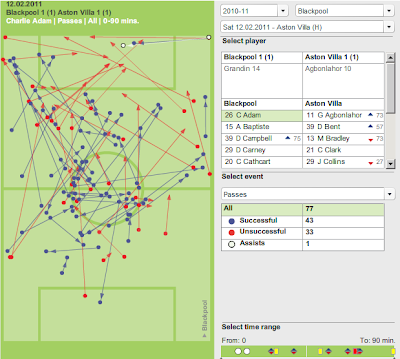 Now this is where it gets interesting. Paul Scholes, who was coming to the end of his career in May, against Blackpool, had a far different record in terms of passing inside 90 minutes than Charlie Adam. A far superior one. Remember, this is a player who in a recent rare interview questioned whether he was still good enough and was playing well enough in the Manchester United side to be worthy to continue at all. He decided the response was negative. The chalkboard below contradicts with the humble opinion of himself. Just look at all of those blue arrows – successful passes. It is a wonder, a joy to behold for a football fan to see what a quality player Paul Scholes is both on the field and on paper. 84 passes were attempted by the midfield maestro, 78 of which were successful – thats more than Adam even attempted, and only 6 were unsuccessful. It was simply, a passing master class, a show of pure, footballing quality that Manchester United must replace to progress.

This is a pattern in Scholes’s play which would have been repeated every time he stepped onto the football pitch last season, and all of the other seasons before that. He had a consistency, even at the age of 36 that was just unbelievable. Sometimes, his passing across the field was so accurate, so pinpoint, it defied belief, as well as his lethal, cutting vision through defences, topped off with a couple of stunning long range efforts, or goals from determined, timed runs into the box, predominantly earlier in his career at United.

Is Charlie Adam the man to replace Paul Scholes? From this, and from the overwhelming negative response from Manchester United fans to even the link of United with Adam, it is a resounding no. Unfortunately, a £12 million Blackpool player and Liverpool target is not good enough by a long shot to replace a Manchester United legend with a passing pedigree to challenge the best in the world. Then again, very few are.