Owen Hargreaves may soon be heading to America in an attempt to play some football in the MLS, with Toronto FC apparently chasing the free agent’s signature. Here, I have a look at whether Owen Hargreaves was, like some people say, a Manchester Un… 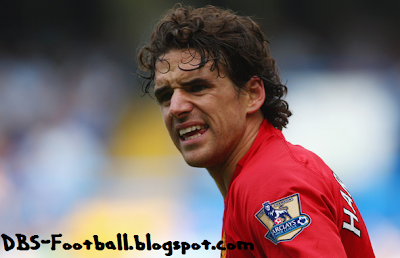 Owen Hargreaves may soon be heading to America in an attempt to play some football in the MLS, with Toronto FC apparently chasing the free agent’s signature. Here, I have a look at whether Owen Hargreaves was, like some people say, a Manchester United failure, or a hugely underrated but also massively unfortunate member of a widely successfully double winning season in 2008.

Just over four years ago, on July 9th 2007, Manchester United had unveiled their new midfield signing, English international, Owen Hargreaves from Bayern Munich in a £17 million deal. It was set to be the start of something new, and something different in the middle of the midfield for United, something that would be successful and title winning for Sir Alex Ferguson. It did, start so well, with Hargreaves winning his second Champions League medal in his first season with United as well as a Premier League medal, but alas, it went drastically and miserably downhill from there.

Today, four years on from his signing, and Owen Hargreaves has the sympathy of many a football fan, being released by United into the footballing wilderness and left looking for a new club or perhaps staring blankly at premature retirement. It is very sad to see, that such a technically gifted player who could have achieved so much more at the top level, just didn’t have the required fitness levels and injury resistance to survive for longer. If only his knees worked. If only those pivotal hinge joints, the biggest and most complex joints in the human body, the knees held out for longer. After all, they are quite important for a footballer.

Hargreaves managed 39 appearances for Manchester United during his four season spell at Old Trafford, with 34 of them coming in his first and most successful season in England. Really, it was the only actual season Hargreaves spent at Manchester United, because most of his time in his last three seasons was in numerous expert hospitals around the world, having his various injuries looked at in an attempt to cure them. Just to emphasise how unfortunate the guy is, Wayne Rooney, Manchester United striker since 2004, has played more games in each season he has been at United than Hargreaves had done in his whole United career.

Injuries wasted this mans career, and ruined his four year contract. United paid £17 million for his signature, and got only a season out of him, whilst having to pay his wages, which allows critics to blast United for paying over the odds on a player who was hardly fit enough to manage a whole season. It allows some cynics to claim that Hargreaves was a complete waste of money for Manchester United, and will go down as one of Sir Alex Ferguson’s worst buys alongside Kleberson, Eric Djemba-Djemba, Diego Forlan and Bebe.

I think, that this assumption is completely unfair, unworthy, and fails to acknowledge Hargreaves’s achievements as a Manchester United player as well as those possible achievements if the injuries had not stood defiantly in his way. There is absolutely no arguing at all that Hargreaves was a big part of Manchester United’s Premier League season in 2007-08, with 23 appearances. He was, as ever, gritty, hard working, the “engine” as some called him in the midfield, and a non stop worker who would win the ball and help to keep it. He scored 2 Premier League goals that season, one you may remember which was the winner against Arsenal in which he curled the free-kick over the Arsenal wall as it flew gracefully into the corner at Old Trafford.

Then, in every Champions League game he played, he was just as important, using his deceptive pace on the right hand side occasionally to whip in some very dangerous crosses as well as being his usual athletic, disciplined and determined self in all other areas. His penalty in the final against Chelsea was perfect; unstoppably placed beautifully into the top corner on United’s way to winning the unbearably tense shoot-out.

Make no mistake, Owen Hargreaves had his fair share of big contributions to that season with Manchester United. While Hargreaves may have cost £17 million, he helped United win over £85 million from Champions League prize money as well as around £15 million from coming first in the Premier League, United didn’t do so bad in Hargreaves first year financially.

Some may persist in saying that £17 million was too much of a risk on a player like this, who had known injury troubles, and they may  have a case, but to say that United made a mistake in signing Hargreaves is not a view I would have any time for. In fact, the players only failing was his fitness, and there was very little he could do about that, with this being pretty much only to do with huge bad luck and nothing else. Hagreaves should spend hours each day on treadmills, put 100% into every training session, eat well and live a healthily lifestyle, bringing his fitness to another level.

Now a free agent, Hargreaves is a player many clubs will be cautiously looking at from a distance. Not because of a lack of quality, but simply because of his injury issues. Any club would be very lucky to have a fit Hargreaves playing in their midfield, as he possesses a quality very rare in modern English internationals, and that is the passion, determination and hard working nature to do anything it takes to win the game. He is very versatile, strong, solid in defence and dangerous in attack and always reliable. All of those qualities he showed in his first season with United, and was a credit to himself in his performances considering he was playing through the pain.

On a pay as you play deal, which is what he is willing to have, Hargreaves would be a fine player to have waiting in the squad for an opportunity. Personally, I think it would be best for him to hang up his boots now, and give those knees a rest, but whatever he does, I wish him well, and thank him for his service for Manchester United, respecting and acknowledging what a tough time he had in the treatment room.