Liverpool take on Capital One Cup winners Swansea City at the Liberty Stadium on Monday night. Here is our predicted Liverpool starting line-up for the game:

Liverpool take on Capital One Cup winners Swansea City at the Liberty Stadium tonight looking to move three points clear at the top of the Premier League table.

The Reds are currently level on points with Arsenal and Tottenham but can open the gap if they avoid defeat tonight as Brendan Rodgers takes on his former side in Wales.

The Northern Irishman must decide whether to hand debuts to deadline day signings Victor Moses and Mamadou Sakho. Moses is expected to come straight in and play alongside Sturridge and Coutinho in attack. However, Sakho may be forced to wait despite Glen Johnson being ruled out for up to four weeks through injury.

Rodgers is likely to stick with the central defensive partnership of Martin Skrtel and Daniel Agger after they impressed against Man Utd last time out, while Kolo Toure is expected to fill in at right back.

Here is our predicted Liverpool line-up for the game: 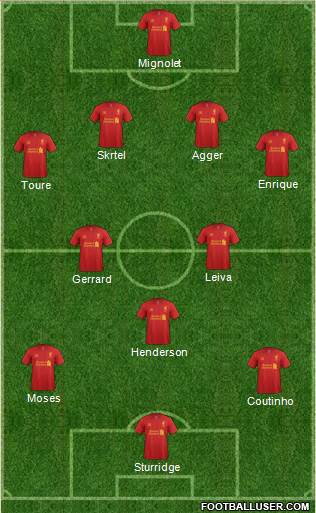 This is a very strong starting eleven for Liverpool and Rodgers has built an extremely capable squad at Anfield this summer, and one which will no doubt be pushing for a top four finish come May.

We’ll have a full match preview up shortly but for now we’ll let you mull over our starting line-up.

What do you think, will this be the team that takes to the field? Share your suggestions in the comments section.