Manchester United welcome high-flying Southampton to Old Trafford on Saturday afternoon looking to close the gap on the early pace-setters.

United have endured a difficult start to the new season and oddly sit behind this weekends visitors in the table, with the defending champions heading into the weekends action a lowly ninth.

David Moyes men have come through the international break unscathed and the Scot is expected to name a full-strength side despite next weeks Champions League clash with Real Sociedad on the horizon.

Rio Ferdinand is likely to return to the starting eleven after recovering from injury and he’ll take his place alongside Nemanja Vidic at the heart of defence, with Rafael and Patrice Evra expected to make up the back-four.

Marouane Fellaini is still settling into life at Old Trafford but he should get another chance to impress beside Michael Carrick in midfield while Wayne Rooney will partner Robin van Persie in attack.

The big decision for Moyes will be whether to start Adnan Janujaz ahead of the likes of Nani and Shinji Kagawa. The youngster burst onto the scene with a stunning double on his debut against Sunderland before the international break and it would be harsh to drop him after his MOTM display, so we think he’ll get the nod on the left. 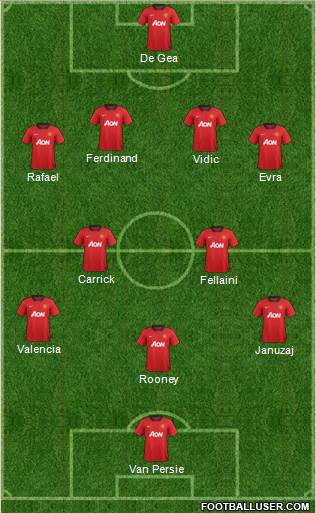