Manchester United play host to Norwich City on Tuesday night in the fourth round of the Capital One Cup. Here’s the starting line-up David Moyes may go with:

Manchester United play host to Norwich City on Tuesday night in the fourth round of the Capital One Cup.

David Moyes used the full extent of his squad in the previous round against Liverpool and is once again expected to mix things up tomorrow.

Anders Lindegaard could be given a rare start in goal while Rafael may be recalled having been among the subs during Saturday’s 3-2 win over Stoke.  Captain Nemanja Vidic and Rio Ferdinand continue to struggle for fitness so Chris Smalling could partner Phil Jones at the back with Alex Buttner given a chance to impress at left back.

Brazilian midfielder Anderson is currently out-of-favour under Moyes but may get some minutes against Norwich but with Marouane Fellaini cup-tied Michael Carrick may retain his place in midfield.

Antonio Valencia and Shinji Kagawa are likely to feature as is summer signing Wilfred Zaha, while the likes of Nani and Ashley Young are also pushing for starts. Striker Javier Hernandez is almost certain to spearhead the attack after coming off the bench to score the winner at the weekend, with Wayne Rooney and Robin van Persie getting a well-earned rest.

Here’s the line-up Moyes may go with: 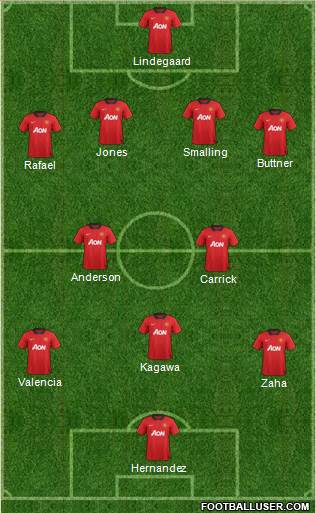 What do you think of our team? What would yours be?