Manchester United take on Real Sociedad on Tuesday night in the Champions League. Here’s the latest team news and our predicted starting eleven for the game.

Manchester United take on Real Sociedad on Tuesday night looking to move one step closer to qualifying to the knockout stages of the Champions League.

United flew out to Spain on Monday without key quartet Danny Welbeck, Michael Carrick, Jonny Evans and Rafael. Welbeck missed the weekend win over Fulham with a knee problem and although he took part in training on Monday morning, he wasn’t deemed fit enough to be in contention against Sociedad.

Carrick also missed the game at Craven Cottage with a calf injury and was unable to train today, while defenders Evans and Rafael – who were forced off against Fulham – also missed training so haven’t been included in the travelling squad.

There is some good news for David Moyes though with Tom Cleverley available despite suffering double vision on Saturday, while left-back Patrice Evra is also passed fit after coming through training unscathed. 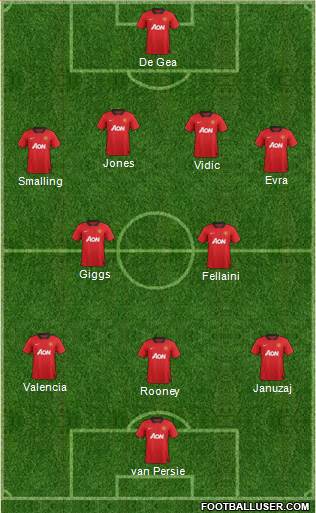