Liverpool play host to Fulham at Anfield on Saturday looking to bounce back following last weeks defeat to Arsenal. Here’s the team Brendan Rodgers might pick.

Liverpool play host to Fulham at Anfield on Saturday afternoon looking to bounce back following last weeks defeat to Arsenal.

Despite going down 2-0 at the Emirates, boss Brendan Rodgers is expected to stick with the majority of the side that lost to the Premier League leaders.

Right-back Glen Johnson was forced to miss that game with an infection in his jaw, but he’s trained all week and should be restored to the starting line-up this weekend with youngster Flanagan dropping out.

There could be another change on the left side with Jose Enrique likely to come back in after returning to training this week. Aly Cissokho was criticised for his display against Arsenal last weekend so will most likely drop back to the bench.

Philippe Coutinho is also expected to make his first start in over two months after making a successful substitute appearance last weekend and he will operate behind Daniel Sturridge and Luis Suarez. 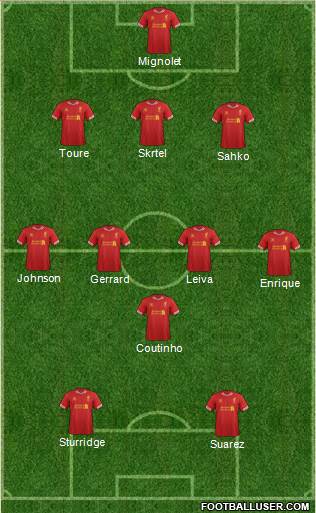