As Tottenham Hotspur prepare to take on Manchester City at the Etihad on Sunday, The Spurs Blogger previews the big game and gives us his predicted score.

As Tottenham Hotspur prepare to take on Manchester City at the Etihad on Sunday, The Spurs Blogger previews the big game.

The international break is finally over! Rejoice as we finally return to league play action, and can now look forward to the fast, exciting attacking play from our Spurs team! On the basis of the game’s leading up to the break, that may be slightly optimistic.

Despite the hoodoo surrounding international friendlies causing countless numbers of un-needed and unwanted injuries, we have only received a single injury concern, with Christian Eriksen being ruled out for the next four weeks with an ankle injury sustained whilst playing for Denmark.

On Sunday we face title hopefuls Manchester City’s whose manager, Manuel Pellegrini, has this week struck off our chances of a title challenge. Thanks for updating us Manuel. Maybe he should concentrate of his own team’s chances, considering the money they’ve paid and the wages they’re on, considering we’re apparently under achieving in 7th, whilst his ‘title challengers’, lie in 8th, not only adding more incentive to perform, but making the importance of getting something out of this game ever more vital.

In terms of the Manchester City team, they’ll be without their captain and key centre half, Vincent Kompany. Kompany is a rock at the back for both club and country, and will be a big miss for the Civilians. They’ll likely start with a combination of Martin Demichelis and Matija Nastasic. This will come of a great advantage to us, as we look to expect a weaker Manchester City defence.

Spanish playmaker, David Silva, will also miss the game as he is suffering from a calf injury, while summer signing from Fiorentina, Stevan Jovetic also misses out with a calf injury.

Pellegrini has stated that he is likely to remain with Costel Pantilimon between the posts, as Joe Hart continues to suffer from a poor vein of form. In my opinion, despite Joe Harts current form, he is a fantastic shot-stopper and although isn’t convincing when coming off his line, I cannot see us getting in many one-on-one situations with the ‘keeper during this match, therefore I’d rather be facing Pantilimon than Hart. Finally, Fernandinho has recovered from his injury which saw him miss the shock loss to Sunderland a couple of weeks ago.

As previously said, we’ll be without Christian Eriksen for the trip to the Etihad stadium, providing AVB a difficult decision on who to play in the number 10 role. Lewis Holtby could take up the role and would seem as likely as anybody else to fill the void.

Erik Lamela could potentially feature in the middle of a dynamic three behind our main striker, but could be a bit of a risk for such a crucial match. Andre Villas Boas has also confirmed that left full back, Danny Rose, is still unable to play, as he continues to recover from the foot injury which he suffered against Tromso in the Europa league.

During the international break, Zeki Fryers, Etiene Capoue and Nacer Chadli had enough time to recover from their respective injuries, and all have the potential to be included in the squad to face Manchester City, but I’d be surprised to see any of them given a start.

Interestingly enough, Andre has been quoted as saying that Adebayor started an indoor match against a local side, playing in a 4-4-2, next to Robbie Soldado. I believe this partnership has potential to flourish, as I’ve said before, in Harry Redknapps last season at the club, Adebayor partnered Louis Saha upfront against Newcastle, where we won 5-0, with Adebayor getting 4 assists, scoring one, whilst Louis Saha scored a brace. Let’s face it, if Adebayor can make Saha look like a half decent striker, the potential that could be made of working with Soldado, is simply mouth-watering. Soldado is screaming for a large lump to line up next to him, to allow him to play off.

After hearing about Danny Rose’s continuing injury, I am further convinced that we need to introduce a true winger onto the left side of the team. Since our left side has consisted of Jan Vertonghen and Gylfi Sigurdsson, Gylfi has cut in; taking the full back, leaving lots of space out on the left, but nobody is exploiting it. I would like to see Andros Townsend put on the left, playing on his preferred foot, whilst in a dynamic three of Townsend-Holtby-Lennon; we have a lot of versatility, not unlike the system AVB introduced to Chelsea.

I think it’s key that Sandro is provided a start, as we don’t continue to see a midfield partnership of Dembele and Paulinho, which has proved ineffective countless times. I think Paulinho’s reliability under pressure, as well as his persistence to get into the box, when giving license to push forward, just edges for him to start against City.

I will be heavily disappointed if Hugo Lloris doesn’t return to the line-up, as he’s clearly fit, after playing all 180 minutes for France, and his importance to the sides play style was made obvious during the 1-0 loss to Newcastle.

I will be interested to see our centre half partnership, as I assume that Jan Vertonghen will start at left full back, AVB must decide whether to continue with Michael Dawson and Vlad Chiriches or to introduce Younes Kaboul back into the fold. In my opinion, I’d like to see Younes and Vlad to partner, as the space behind our high line has been exploited on too many occasions, as Michael doesn’t have the turn of pace to make up the ground, whilst the other three centre halves do. 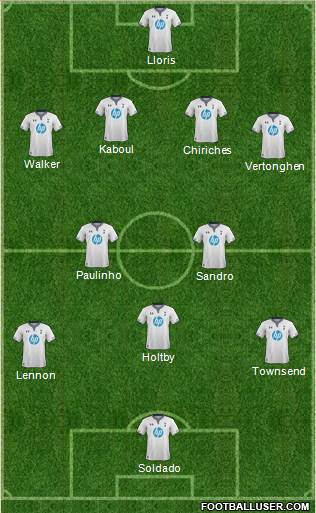 Man City 1-1 Tottenham: I believe we could push for a draw, as long as we go there and not fear our opposition. Our midfield runners could hurt City, whilst a weaker defence and goalkeeper could provide Robbie Soldado a few chances. Whatever happens, I’m sure I’ll find something to have a moan about, enjoy the match.