Liverpool take on Hull City on Sunday afternoon hoping to close the gap at the top of the Premier League. Here’s the predicted Liverpool team for the game.

Liverpool take on Hull City on Sunday afternoon hoping to close the gap at the top of the Premier League.

The Reds could be as much as seven points adrift of leaders Arsenal by the time they kick off so victory over Hull will be vital in keeping pace with the Gunners.

Boss Brendan Rodgers confirmed earlier today that the fitness of striker Daniel Sturridge will be assessed before the game but it’s expected he’ll be restored to the starting line-up this weekend.

Sturridge was only deemed fit enough to be a substitute for last Saturday’s thrilling 3-3 draw with Everton and came off the bench to grab a late equaliser. He’s trained well all week so there’s no reason he won’t start against the Tigers on Sunday.

Joe Allen is likely to be the one to drop out with Liverpool reverting back to a 4-4-2 formation, although Victor Moses is pushing Jordan Henderson to start on the right side of midfield.

Jose Enrique is facing a lengthy spell on the sidelines so Rodgers has a decision to make at left-back. Jon Flanagan was preferred to Aly Cissokho last time out and put in an excellent display so he could retain his place with Glen Johnson continuing at right-back.

Here’s the team Rodgers could go with: 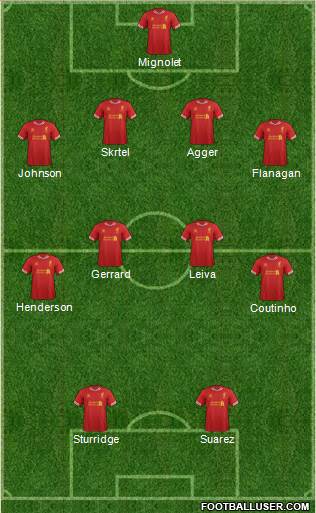