Liverpool entertain Hull City at Anfield on New Years Day looking to get back to winning ways in the Premier League. Here’s our predicted starting line-up.

Liverpool entertain Hull City at Anfield on New Years Day looking to get back to winning ways in the Premier League.

The Reds excellent start to the season has been derailed by successive 2-1 defeats to Man City and Chelsea so three points is vital on Wednesday to get them back on track and continue their push for a Champions League place at the very least.

Brendan Rodgers cause hasn’t been helped by a recent spate of injuries with Mamadou Sakho joining the injury list after pulling his hamstring last time out at Stamford Bridge.

Midfielder Joe Allen is also set for a spell on the sidelines after being forced off against Chelsea but Jordan Henderson is expected to shake off a minor knock to face the Tigers.

Captain Steven Gerrard is also likely to return after missing the last three weeks with a hamstring injury and he’ll be given a late test to prove his fitness but Jose Enrique, Jon Flanagan and Daniel Sturridge remain out through injury.

Here’s the line-up Rodgers could go with: 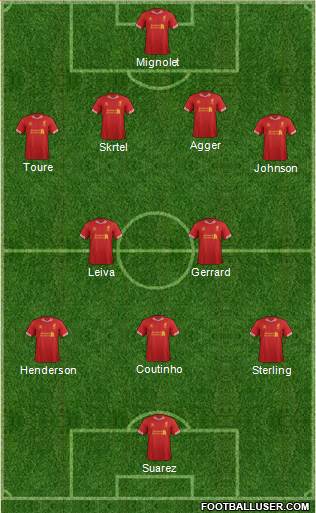