Manchester United entertain Swansea City at Old Trafford on Sunday evening in the third round of the FA Cup. Here is our predicted line-up for the game.

Manchester United entertain Swansea City at Old Trafford on Sunday evening in the third round of the FA Cup.

David Moyes is expected to make several changes from the side that lost 2-1 to Tottenham Hotspur on Wednesday. Rio Ferdinand and Alexander Buttner could come in to the back four with Nemanja Vidic and Patrice Evra given well-earned rests.

With Rafael still out injured, Chris Smalling should continue at right-back although Fabio is pushing for a recall. Veteran Ryan Giggs or the fit again Darren Fletcher are likely to come in for Tom Cleverley in midfield while Ashley Young and Shinji Kagawa could get run outs in attack with Adnan Januzaj given a breather.

Wayne Rooney aggravated his groin injury against Spurs so should be rested meaning Javier Hernandez is likely to start up front with Robin van Persie still nursing his own injury. 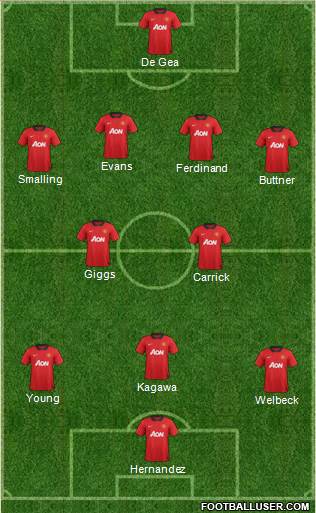