Liverpool entertain Oldham Athletic at Anfield in the third round of the FA Cup on Sunday afternoon. Here’s a preview with team news and prediction for the game

The Reds bounced back from their disappointing successive league defeats to Manchester City and Chelsea with a routine 2-0 win over Hull City on New Year’s Day to climb back into the top four of the Premier League.

Brendan Rodgers will be looking to keep up the momentum this weekend and has vowed to avoid a repeat of last year’s shock defeat against Oldham, when the Mersey giants crashed to a 3-2 loss at Boundary Park in the fourth round of the FA Cup.

Despite suggesting he won’t tinker too much with his line-up for the game in a bid to avoid another giant-killing, Rodgers is still expected to rest some of his key men.

Luis Suarez, Jordan Henderson and Philippe Coutinho are among those who are likely to get a breather with Iago Aspas, Luis Alberto and Victor Moses likely to start.

Steven Gerrard is expected to feature after coming off the bench on Wednesday after recovering from a hamstring strain that had kept him out for four weeks.

Glen Johnson limped off against Hull with a knock so is expected to miss out with Martin Kelly coming in at right back. Kolo Toure is also pushing for a recall while Aly Cissokho should continue at left-back in the absence of Jose Enrique and Jon Flanagan – who are both injured.

Daniel Sturridge is due back in training next week but this game comes too soon for the striker so he joins Joe Allen on the sidelines. 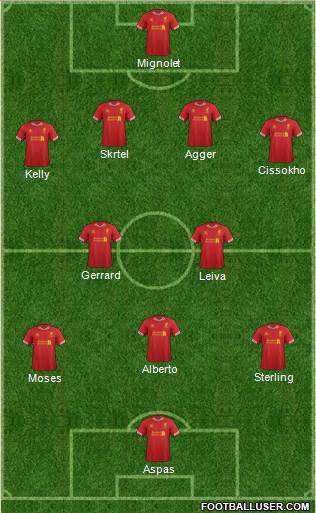 Steven Gerrard: With the likes of Suarez and Coutinho expected to be rested, it will be up to the skipper to step up and guide the Reds to victory.

Liverpool 2-0 Oldham: Despite making some changes we can see the Premier League side easing to a 2-0 win on Sunday.

What line-up do you think Rodgers should select? What’s your score prediction? Share your views below.