Manchester United take on Sunderland at the Stadium of Light tonight in the first leg of their Capital One Cup semi final. Here’s a preview with team news.

Manchester United take on Sunderland at the Stadium of Light tonight in the first leg of their Capital One Cup semi final.

United will be looking to bounce back from yet another disappointing home defeat, with Swansea City the latest team to come away from Old Trafford victorious with a 2-1 win on Sunday to knock the Red Devils out of the FA Cup at the first hurdle.

The loss heaped the pressure on boss David Moyes following a difficult start to his reign as Sir Alex Ferguson’s successor. The defending champions currently sit seventh in the Premier League table – a full 11 points off leaders Arsenal – so the Scot will be looking to appease his doubters by moving one step closer to securing silverware in his first season in charge.

United have already seen-off Liverpool, Norwich and Stoke en route to the semi’s and while they will face a Sunderland side that currently props-up the league table, they will be aware that Gus Poyet’s men knocked Chelsea out in the previous round.

The Black Cats lost to Aston Villa last Wednesday making it just one win in seven in the league but they did beat Carlisle 3-1 in the FA Cup on Saturday to maintain their excellent form in the domestic cups.

Moyes is expected to recall a number of first team regulars for the game after fielding a weakened side against Swansea at the weekend.

David Dea Gea, Nemanja Vidic and Patrice Evra should all return to the back five while Micheal Carrick is expected to start alongside Tom Cleverley in midfield.

Wayne Rooney appears to have won his fitness race after missing the Swansea clash with a knock, and he’s likely to support Danny Welbeck up front.

Robin van Persie and Phil Jones remain injured and they join Nani, Marouane Fellaini, Ashley Young and Rafael on the sidelines, while Fabio is suspended following his sending off at the weekend.

Former United defender John O’Shea is expected to return for the home side after missing the last four games with a shoulder injury. The Republic of Ireland international is back in training and should play alongside Wes Brown at the back.

Valentin Roberge and Modibo Diakite are also in contention after recovering from injury but goalkeeper Keiren Westwood (shoulder) and defender Carlos Cuellar (hip) remain on the sidelines. 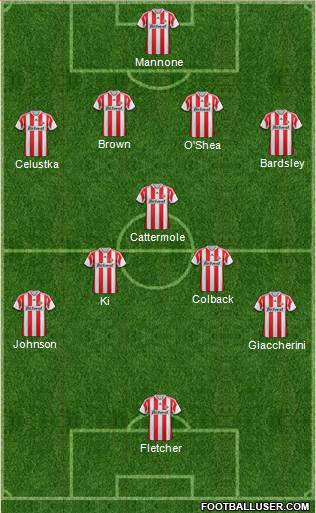 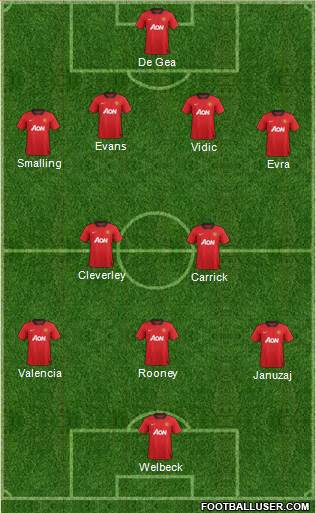 Adnan Januzaj: The youngster has been a rare shining light in what’s been a difficult season so far and we can see him causing the Sunderland defence all sorts of problems tonight.

Sunderland 1-2 Man Utd: The hosts will be right up for this one but we predict United will come away with a precious lead heading into the second leg.

What team would you like to see put out and what’s your predicted score? Share your views below.