Liverpool take on Southampton at St Marys Stadium on Saturday evening looking to close in on the league’s top three, here’s our predicted team for the game.

Liverpool take on Southampton at St Marys Stadium on Saturday evening, here’s our predicted team for the game.

Brendan Rodgers confirmed at his press conference on Thursday afternoon that Mamadou Sakho returned to training this week and will be assessed ahead of the game, but it’s not expected he’ll be risked just yet after such a long time out.

The big question will be whether Daniel Agger will be dropped having been hauled off on the hour mark against Swansea last week after a disappointing display. However, Rodgers hinted today that the Dane may keep his place alongside Martin Skrtel at the back.

Jon Flanagan started at left-back last week and should retain his place ahead of Aly Cissokho, while Glen Johnson is also expected to start again after making a successful return from injury against the Swans.

The front six should remain unchanged after putting in some superb displays in recent weeks, although Joe Allen and Victor Moses are pushing for recalls. Lucas Leiva is also back in training but isn’t yet ready to return.

Here’s the team we think Rodgers will go with: 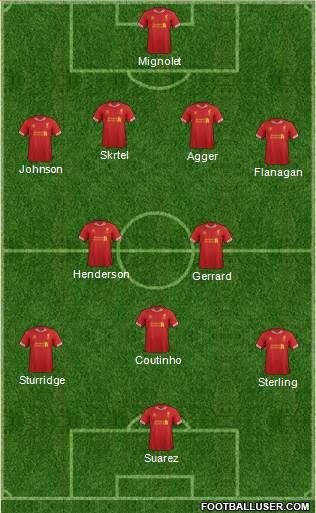 Liverpool head into the weekend action sitting six points clear of fifth-placed Tottenham so they’ll be hoping to extend that advantage while also having one eye on the top three, with the Reds now just four points adrift of leaders Chelsea.

What team would you like Rodgers to go with? Leave your suggestions below.