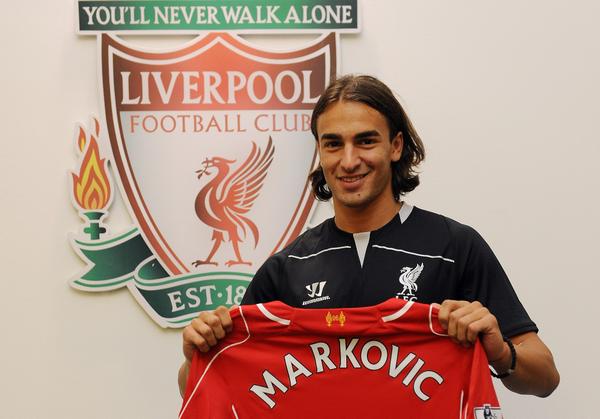 Ahead of the game, boss Brendan Rodgers has been speaking to the media this afternoon and gave Liverpoolfc.com a team news and injury update including the latest on Lazard Markovic, Alberto Moreno, Adam Lallana, Jose Enrique, Daniel Agger and John Flanagan.

The good news for the Reds is that Rodgers confirmed that Markovic is available to make his debut against City having missed the last few weeks due to an injury picked up in pre-season.

The Serbian international attacker is unlikely to start but could come off the bench at some stage to make his competitive debut following his big-money move from Benfica in July.

The Reds boss also confirmed that left-back Moreno is in contention to make his bow having been ineligible to face Southampton last weekend following his move from Sevilla. Rodgers praised the young Spaniard and believes the 22-year-old will be able to make a quick impact at Anfield, and he’ll now battle the likes of Jose Enrique, Glen Johnson and Jon Flanagan for the left-back role.

There was also positive news on the injury front with Adam Lallana due to resume training this weekend after a stint on the sidelines with a knee injury, however, the 26-year-old won’t be available for Monday’s trip to Manchester.

Lallana will be joined on the sidelines by defenders Agger and Flanagan- who continues to miss out with minor knocks – while the Liverpool staff will assess the fitness of long-term injury victim Jose Enrique as he continues to gain sharpness following a serious knee injury.

Here is what Rodgers told the clubs official site:

“Markovic will come into the squad. He has been excellent in training and has worked very hard to come back.”

“He’ll [Moreno] be in the squad, he comes in fit. He’s a young player that is very dynamic going forward.

“He gives us balance – he has got a great left foot, passes it well and sees the pass early. He gets forward on the outside and can penetrate on the inside.

“He’s very hungry and keen to learn; he has got good experience and comes in as a winner. He won the Europa League last year so he comes in with a good mentality. At 22, he has still got a lot of development in him. He’ll pick up the pace very quickly.

“He comes in as a regular starter from Sevilla so I expect him to show over the coming years that he’s a really attacking player that will fit Liverpool perfectly.”

“Adam Lallana is in the latter stages of his rehabilitation; he will join the group although obviously won’t be in the squad for Monday,”

“He has been with our conditioning coaches so he will train with the team on Sunday. He is looking in great condition and we’ve just got to get him up to match speed.

“We’ll see how Jose Enrique goes, and Daniel Agger is still out. Jon Flanagan is still a bit of time off as well. Apart from that, the squad is healthy and looking very good.”

Liverpool and City both head into the game on Monday having secured victories on the opening day, so neither side will want to lose any ground on their title rivals by dropping points so early on in the campaign.