Could Newcastle be dragged into a relegation battle?

What looked to be shaping up as a promising season for Newcastle has turned into a campaign to forget, with the club enduring a slide towards the drop zone 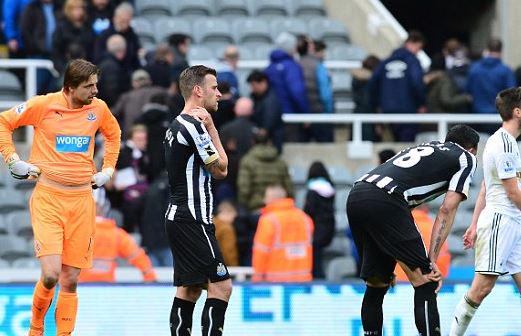 What looked to be shaping up as a promising season for Newcastle has quickly turned into a campaign to forget, with the club enduring a dangerous slide towards the relegation zone that shows no sign of stopping. It seems unthinkable that a club with a superb fanbase and number of good quality players would find themselves struggling at the wrong end of the table, but Newcastle have been in decline ever since Alan Pardew left the club in January. Many fans were happy to see the back of Pardew despite him leading the team towards a potential top ten finish and Europa League spot, but they have been left watching on with envy as their former manager has transformed Crystal Palace and his predecessor, John Carver, has failed to make any sort of impact. The caretaker manager has recorded a mere eight points from a possible forty-two since taking charge, with Mike Ashley’s cost-effective decision to put the long-serving coach in temporary control of first team affairs backfiring dramatically. Seven consecutive defeats have heightened their woes even further, and with just four games remaining the bookies think Newcastle could find themselves in a real battle to avoid the drop if they do not pick up points – and quickly.

It is clear that there is a seriously lack of confidence and belief flowing through the Newcastle squad, with the passion and fight that fans expect from every player who puts on the black and white simply not evident if performances in recent weeks are anything to go by. They may have endured a series of injury problems during the season, but it cannot continue to be used as an excuse as the level of commitment and determination has visibly ebbed away during the seven-game losing streak. Carver may believe he is still the right man for the job, but while certain fans may feel sympathy for the caretaker manager being put in a difficult situation after Newcastle failed to secure an adequate managerial replacement, just two wins in fourteen attempts has done little to convince the St. James’ Park faithful that he deserves the role full-time. Club legend Alan Shearer has recently launched a scathing attack on the current predicament at Newcastle, with the 3-2 defeat against Swansea sending the team further towards an end-of-season relegation battle as they now sit just five points away from local rivals Sunderland who currently sit eighteenth.

Four games to save their season

The performance against Swansea may have been a small step in the right direction following the previous disappointments against Everton, Liverpool and the North East derby against Sunderland, but Newcastle will need to step up to the plate in their remaining fixtures to secure their Premier League status. Newcastle are in the fortunate position that just one win could ensure their safety, but with Leicester hitting a superb, yet unexpected, run of form, and both Hull and Aston Villa beginning to pick up points, Carver’s team are in no position to become complacent and assume other teams will slip up. Upcoming fixtures against West Brom, Queens Park Rangers and West Ham present a wonderful opportunity for Newcastle to secure enough points to push them away from danger, but irrespective of whether Carver manages to preserve their place in the top flight, big changes are required on and off the pitch at St James’ Park during the summer to bridge the increasing gap between the club and its passionate fans.