Manchester United take on Basel in the Champions League on Wednesday night. Here is the team I think Jose Mourinho will pick for the game:

Manchester United will be looking to maintain their 100% record in the Champions League when they take on Basel on Wednesday night.

United have already qualified for the knockout stages so Jose Mourinho is expected to freshen his starting eleven. Here is the team I think he’ll pick for the game:

Goalkeeper: The United boss has resisted the temptation to give Sergio Romero game-time in the Champions League so far this season so I expect David De Gea will continue between the sticks tomorrow.

Defence: Mourinho has confirmed that Phil Jones has been ruled out for at least another two games with a thigh injury that was picked up during the international break.

Eric Bailly also hasn’t travelled due to a knock that kept him out of the Newcastle game at the weekend so Chris Smalling is set to continue alongside Victor Lindelof at the back.

However, Mourinho could rotate his full-backs to give Antonio Valencia and Ashley Young a rest with Matteo Darmian and Daley Blind favourites to come in.

Marcos Rojo is set for a place on the bench and he’ll be hoping to get some game-time after recently returning from a knee injury.

Midfield: Paul Pogba was excellent on his return to the starting eleven at the weekend but Mourinho may decide to give him a rest as he’s only just recovered from a serious hamstring injury and there’s no point pushing him too hard.

Ander Herrera could therefore come in to the team alongside Nemanja Matic – although Marouane Fellaini is another option for Mourinho after he returned from injury against Newcastle.

Attack: Zlatan Ibrahimovic also made his long-awaited comeback from a serious knee ligament injury with a late substitute appearance on Saturday evening.

The Swedish super star played the final 20 minutes and Mourinho has confirmed he’s not in a position to start just yet so Romelu Lukaku will continue to lead the line up front.

Marcus Rashford could keep his place in attack but I think we’ll see changes elsewhere with Juan Mata and Anthony Martial dropping out. Henrikh Mkhitaryan is in-line for a recall after being left out against Newcastle while Jesse Lingard is also pushing for a start. 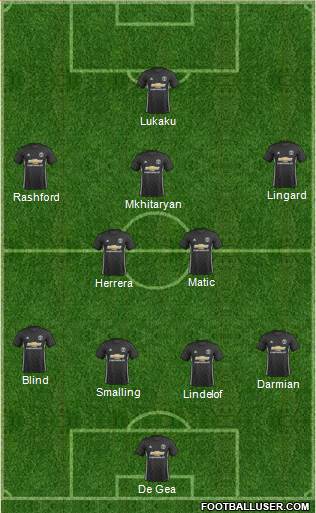