Mikel Arteta takes charge of his first game as head coach when Arsenal take on Bournemouth on Boxing Day. Here is the team we expect him to select:

Mikel Arteta takes charge of his first game as head coach when Arsenal take on Bournemouth on Boxing Day. Here is the team we expect him to select:

Goalkeeper: Bernd Leno has been one of Arsenal’s best players this season so I don’t expect Arteta to change our number one. Emi Martinez will continue as back-up on the bench.

Defence: Arsenal have been woeful at the back this season so improving the defence has to be a priority for Arteta and he may be able to call upon Hector Bellerin on Thursday after he returned to full training following a hamstring injury.

Sokratis is back in contention again after serving a one-match suspension and he should replace Calum Chambers in the back four as he’s ruled out after picking up his fifth booking of the season.

Rob Holding will be given a late fitness test after only recently recovering from a knee injury but David Luiz could keep his place in defence. Kieran Tierney and Sead Kolasinac remain on the sidelines so Bukayo Saka could continue at left-back after impressing in the unfamiliar role against Everton.

Midfield: It will be interesting to see what formation Arteta goes with but he’s being tipped to deploy a variation of a 4-3-3 system so Granit Xhaka could start in the deep-lying role with Lucas Torreira and Matteo Guendouzi ahead of him.

Dani Ceballos is back in full training but he won’t be ready to start just yet having been out for nearly eight weeks. If Arteta does go with a 4-3-3 then Mesut Ozil could be a casualty as there would be no room for the German in the No.10 role.

Ozil is available after missing the 0-0 draw at Everton with a minor foot problem but former interim boss Freddie Ljungberg said he wouldn’t have picked the playmaker even if he was fit after his poor reaction to being subbed against Man City. Arteta is expected to give Ozil a clean slate but there might still not be a place for him in his starting eleven.

Attack: Pierre-Emerick Aubameyang is expected to lead the line up front against Bournemouth which means Alexandre Lacazette may have to settle for a place among the substitutes once again.

Gabriel Martinelli is a doubt with a minor knock but Arteta should give the Brazilian every chance to prove his fitness as he’s been a rare shinning light lately. If fit, I expect Martinelli to keep his place on the left wing.

Nicolas Pepe wasn’t involved against Everton but I wouldn’t be surprised to see him recalled on Thursday with Reiss Nelson making way. Emile Smith Rowe may also drop out after struggling to make an impression against Everton last weekend. 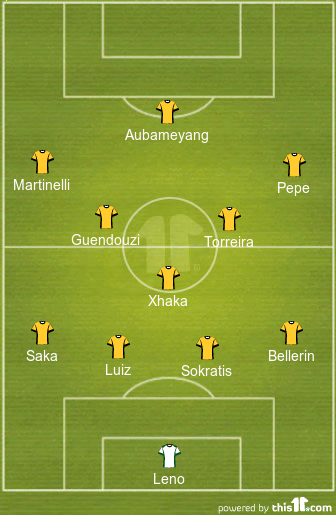