Manchester United take on Newcastle at St James Park on Boxing Day. Here is the team we think Ole Gunnar Solskjaer will select for the game:

Manchester United will be looking to get back to winning ways when they take on Newcastle at St James Park on Boxing Day. Here is the team we think Ole Gunnar Solskjaer will select for the game:

Goalkeeper: David De Gea made a shocking error during the defeat at Watford but the Spaniard is still expected to retain his place against Newcastle.

Defence: Solskjaer could freshen things up in defence as Luke Shaw has started in four of United’s last five games so he may be given a rest with Ashley Young or Brandon Williams recalled at left-back.

That may be the only change though as Aaron Wan-Bissaka, Harry Maguire and Victor Lindelof are all expected to retain their places in the Man Utd back four. Eric Bailly is back in training after a knee injury but he’s still lacking match fitness along with Diogo Dalot.

Midfield: United were given a huge boost with the return of Paul Pogba off the bench at the weekend after he recovered from a niggling foot injury. The Frenchman looked sharp and Solskjaer has hinted he’s ready to start so I think we’ll see Pogba lining-up against Newcastle on Boxing Day.

Scott McTominay is almost certain to keep his place while Solskjaer may keep Fred alongside the Scotsman with Pogba starting in the attacking central midfield position at St James’ Park. The likes of Nemanja Matic, James Garner and Andreas Pereira will vie for places on the Man Utd substitutes bench.

Attack: Solskjaer is unlikely to tinker too much with his front three, despite United drawing a blank at Vicarage Road last time out. Marcus Rashford and Anthony Martial should keep their places in attack but Solskjaer will be demanding more from his star forwards.

Mason Greenwood is pushing for a recall and he’s probably next in line if a change is made but I think Daniel James will keep his place on the wing. Jesse Lingard and Juan Mata will be other options from the bench. 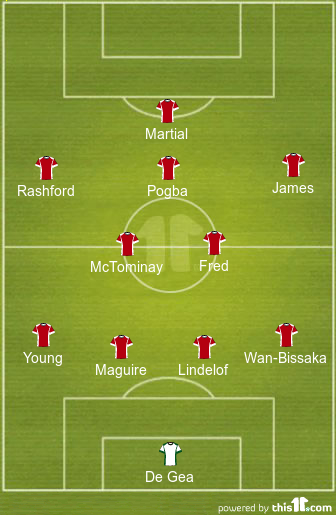